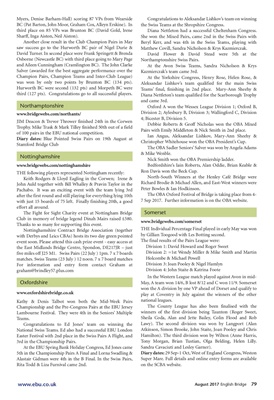 third place on 85 VPs was Brunton BC (David Gold, Irene

Another close result in the Club Champion Pairs in May

saw success go to the Hurworth BC pair of Nigel Durie &

Osborne (Newcastle BC) with third place going to Mary Page

and Aileen Cunningham (Cramlington BC). The John Clarke

Salver (awarded for the best aggregate performance over the

Hurworth BC were second (132 pts) and Morpeth BC were

of 100 pairs in the EBU national competition.

John Auld together with Bill Whalley & Pravin Taylor in the

Pachabo. It was an exciting event with the team lying 3rd

after the first round and still playing for everything lying 10th

The Fight for Sight Charity event at Nottingham Bridge

Thanks to so many for supporting this event.

Championship and the Pre-Congress Pairs at the EBU Jersey

Lambourne Festival. They were 4th in the Seniors' Multiple

Congratulations to Ed Jones' team on winning the

Easter Festival with 2nd place in the Swiss Pairs A Flight, and

3rd in the Championship Pairs.

5th in the Championship Pairs A Final and Lorna Swadling &

Alastair Gidman were 4th in the B Final. In the Swiss Pairs,

the Swiss Teams at the Shropshire Congress.

She won the Mixed Pairs, came 2nd in the Swiss Pairs with

Beryl Kerr, and was 4th in the Swiss Teams, playing with

David Flower & David Stead were 5th at the

Oxford A won the Wessex League Division 1; Oxford B,

The OBA Sadler Seniors' Salver was won by Angela Adams

North-South Winners at the Henley Café Bridge were

The OBA Oxford Festival of Bridge is taking place from 47

THE Individual Percentage Final played in early May was won

The final results of the Pairs League were:

In the Western League match played against Avon in midMay,

play at Coventry in July against the winners of the other

The County League has also been finalised with the

winners of the first division being Taunton (Roger Sweet,

Lawy). The second division was won by Langport (Alan