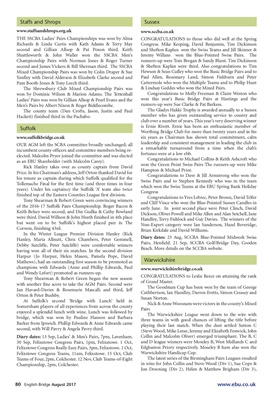 THE SSCBA Ladies' Pairs Championships was won by Alma

Ladies' Pairs was won by Gillian Allsop & Pearl Evans and the

Hackett) finished third in the Pachabo.

OUR AGM left the SCBA committee broadly unchanged; all

Malcolm Pryor joined the committee and was elected

as an EBU Shareholder (with Malcolm Carey).

Rick Hanley takes over as county captain from David

Price. In his Chairman's address, Jeff Orton thanked David for

his tenure as captain during which Suffolk qualified for the

Tollemache Final for the first time (and three times in four

years). Under his captaincy the Suffolk 'A' team also twice

but went on to be Suffolk's highest placed pair in The

having won all of their six matches. In the second division

Mathews), had an outstanding first season to be promoted as

and Wendy Lefort) promoted as runners-up.

with another fine score to take the AGM Pairs. Second were

At Suffolk's second 'Bridge with Lunch' held in

Somersham players of all experiences from across the county

enjoyed a splendid lunch with wine. Lunch was followed by

bridge, which was won by Pauline Hanson and Barbara

CONGRATULATIONS to those who did well at the Spring

and Shefton Kaplan won the Swiss Teams and Jill Skinner &

Hewson & Sean Cufley who won the Basic Bridge Pairs and to

Cattermole who won the Multiple Teams and to Philip Hunt

won this year's Basic Bridge Pairs at Hastings and the

The Gladys Hakki Trophy is awarded annually to a Sussex

member who has given outstanding service to county and

club over a number of years. This year's very deserving winner

is Ernie Rivett. Ernie has been an enthusiastic member of

Worthing Bridge Club for more than twenty years and in his

leadership and consistent management in leading the club in

a remarkable turnaround from a time when the club's

fortunes were at a low ebb.

won the Green Point Swiss Pairs The runners-up were Mike

Congratulations to Dave & Jill Armstrong who won the

Swiss Pairs and to Stephen Kennedy who was in the team

which won the Swiss Teams at the EBU Spring Bank Holiday

and Cliff Vince who won the Blue-Pointed Sussex Candles in

Handley, Terry Fishlock and Guy Davies. The winners of the

CONGRATULATIONS to Leslie Reece on attaining the rank

The Goodman Cup has been won by the team of George

Nick & Anne Woosnam were victors in the county's Mixed

The Warwickshire League went down to the wire with

three teams in with good chances of lifting the title before

playing their last match. When the dust settled Sutton C

Collin and Malcolm Oliver) emerged triumphant. The B, C

and D league winners were Moseley B, West Midlands C and

Edgbaston Priory respectively. Moseley B have also won the

The latest series of the Birmingham Pairs Leagues resulted