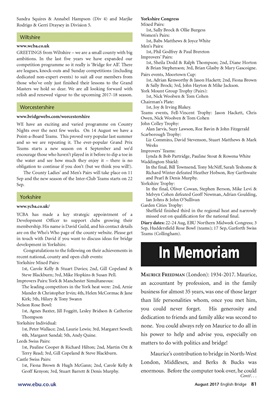 GREETINGS from Wiltshire - we are a small county with big

ambitions. In the last five years we have expanded our

competition programme so it really is 'Bridge for All'. There

are leagues, knock-outs and Sunday competitions (including

dedicated non-expert events) to suit all our members from

those who've only just finished their lessons to the Grand

Masters we hold so dear. We are all looking forward with

relish and renewed vigour to the upcoming 2017-18 season.

WE have an exciting and varied programme on County

Nights over the next few weeks. On 14 August we have a

and so we are repeating it. The ever-popular Grand Prix

Teams starts a new season on 4 September and we'd

obligation to continue if you don't (but we think you will!).

The County Ladies' and Men's Pairs will take place on 11

YCBA has made a key strategic appointment of a

membership. His name is David Guild, and his contact details

are on the Who's Who page of the county website. Please get

Congratulations to the following on their achievements in

The leading competitors in the York heat were: 2nd, Arnie

Sheffield finished third in the regional heat and narrowly

missed out on qualification for the national final.

an accountant by profession, and in the family

business for almost 35 years, was one of those larger

than life personalities whom, once you met him,

you could never forget. His generosity and

dedication to friends and family alike was second to

none. You could always rely on Maurice to do all in

his power to help and advise you, especially on

matters to do with politics and bridge!

Maurice's contribution to bridge in North-West

London, Middlesex, and Berks & Bucks was

enormous. Before the computer took over, he could