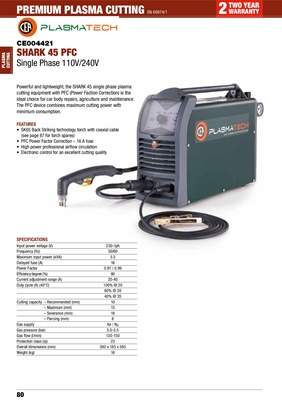 Back striking represents the best solution for plasma torches up

to 60A. In conventional torches without high frequency, the arc

striking is obtained by means of compressed air which moves

away the electrode head from the inner part of the nozzle. This

system causes, in the plasma flow exit area, both electrode and

nozzle material deterioration because of burns and deformations

subsequent to pilot arc striking between them. In contrast, the

• Longer life of the consumables

• Striking is always precise and safe

of radial and swirling gas flows to the cutting arc axis, thus

creating a plasma beam at a very high temperature that melts

and vaporizes the surface being cut in a more efficient way.

This technology also avoids the phenomenon of the double arc

- formation of two arcs in series between the cathode and the

workpiece surface - the main reason for damage to the nozzle

and arc instability by ensuring the highest quality and the

best cutting performance, together with a longer life of the

High Performance Cutting technology is the very best choice for

plasma torches with nominal cutting currents above 60A.

This is achieved by easily removing the molten material with a

consequent improvement of the cutting quality, which shows

• Longer life of the consumables