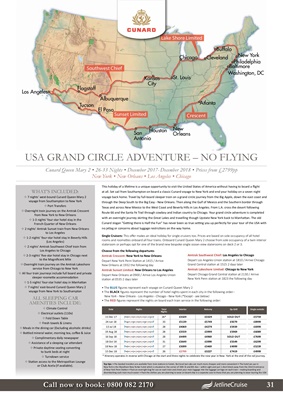 * Itinerary operates in reverse with Chicago at the start and three nights to celebrate the new year in New York at the end of the rail journey.

voyage from Southampton to New York

from New York to New Orleans

service from Chicago to New York

✥ All four train journeys include full board and private

voyage from New York to Southampton

to bunk beds at night

or Club Acela (if available).

at all. Set sail from Southampton on board a classic Cunard voyage to New York and end your holiday on a seven night

voyage back home. Travel by full-board sleeper train on a grand circle journey from the Big Apple, down the east coast and

through the Deep South to the Big Easy - New Orleans. Then along the Gulf of Mexico and the Southern border through

Texas and across New Mexico to the West Coast and Beverly Hills in Los Angeles. From L.A. cross the desert following

Route 66 and the Santa Fe Trail through cowboy and Indian country to Chicago. Your grand circle adventure is completed

with an overnight journey skirting the Great Lakes and travelling though Upstate New York back to Manhattan. The old

no jetlag or concerns about luggage restrictions on the way home.

• The BLUE figures represent each voyage on Cunard Queen Mary 2

• The BLACK figures represent the number of hotel nights spent in each city in the following order:-

• The RED figures represent the nights on board each train service in the following order:

Single Cruisers: This offer makes an ideal holiday for single cruisers too. Prices are based on sole occupancy of all hotel

rooms and roomettes onboard all four trains. Onboard Cunard Queen Mary 2 choose from sole occupancy of a twin interior

stateroom or perhaps opt for one of the brand new bespoke single ocean-view staterooms on deck 2 or 3.

Choose from the following departures

New Orleans at 1932 the following day

Top tips: • Pre-booked transfers are available from train stations to hotels. But local taxi cabs are much more cheaper and more convenient • The hotel we use in