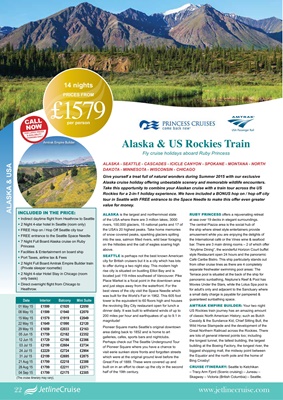 Rockies for a 2-in-1 holiday experience. We have included a BONUS hop on / hop off city

INCLUDED IN THE PRICE:

• Facilities & Entertainment on board ship

• Direct overnight flight from Chicago to

ALASKA is the largest and northernmost state

on the hillsides and the call of eagles soaring high

SEATTLE is perhaps not the best known American

to offer during a two night stay. This modern high

rise city is situated on bustling Elliot Bay and is

Place Market is a focal point in the downtown area

and just steps away from the waterfront. For the

best views of the city visit the Space Needle which

tower is the equivalent to 60 floors high and houses

the revolving Sky City restaurant open for lunch a

dinner daily. It was built to withstand winds of up to

of Pioneer Square where you have a chance to

which were at the original ground level before the

Great Fire of 1889. These were covered up and

half of the 19th century.

at sea over 19 decks in elegant surroundings.

The central Piazza area is the social hub of

amusement while you are enjoying the delights of

the International café or the Vines wine & seafood

bar. There are 3 main dining rooms - 2 of which offer

from other cruise lines as there are 4 completely

Terrace pool is situated at the back of the ship for

Movies Under the Stars, while the Lotus Spa pool is

for adult's only and adjacent to the Sanctuary where

a small daily charge is payable for pampered &

US Rockies train journey has an amazing amount

of classic North American History; such as Butch

Wild Horse Stampede and the development of the

Great Northern Railroad across the Rockies. There

are lots of general interest points too; including

the longest tunnel, the tallest building, the largest

building at the Boeing Factory, the longest river, the

the Equator and the north pole and the home of

(The cruise itinerary may vary).