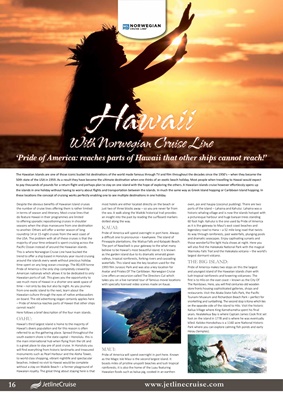 16Despite the obvious benefits of Hawaiian Island cruises

the number of cruise lines offering them is rather limited

in terms of season and itinerary. Most cruise lines that

do feature Hawaii in their programmes are limited

seasons when the ships manoeuvre from one destination

to another. Others will offer a winter season of long

roundtrip 14 or 15 night cruises from the west coast of

the USA. The problem with all of these cruises is that the

majority of your time onboard is spent cruising across the

Pacific Ocean instead of around the Hawaiian islands.

This is where Norwegian Cruise Line have bucked the

trend to offer a ship based in Honolulu year round cruising

around the islands every week without precious holiday

time spent on any long ocean crossings. The 80,439 tonne

Pride of America is the only ship completely crewed by

American nationals which allows it to be dedicated to only

Hawaiian ports of call. This gives you the opportunity to

time - not only by day but also by night. As you journey

from one exotic island to the next, learn about the

Hawaiian culture through the eyes of native ambassadors

on board. The old advertising slogan certainly applies here

- Pride of America reaches parts of Hawaii that other ships

Here follows a brief description of the four main islands.

Hawaii's third largest island is home to the majority of

Hawaii's divers population and for this reason is often

referred to as the gathering place. Spread throughout the

south eastern shore is the state capital - Honolulu. this is

the main international hub when flying from the UK and

is a great place to stay pre of post cruise. In Honolulu you

will find everything from historic landmarks and treasured

monuments such as Pearl Harbour and the Aloha Tower,

beaches. Indeed no visit to Hawaii would be complete

without a stay on Waikiki Beach - a former playground of

Hawaiian royalty. The great thing about staying here is that

oven, poi and haupia (coconut pudding). There are two

ports of the island - Lahaina and Kahului. Lahaina was a

historic whaling village and is now the islands hotspot with

60 foot high. Kahului is the one used by Pride of America

as it is the gateway to Maui's east coast beaches and

legendary road to Hana - a 52 mile long road that twists

its way through rainforests, past waterfalls, plunging pools

those wonderful fire light Hula shows at night. Here you

will also find the Haleakala National Park with the magical

Waimoku Falls Trail and the Haleakala volcano - the world's

Pride of America makes two stops on this the largest

and youngest island of the Hawaiian islands chain with

The Rainbows. Here, you will find centuries-old wooden

snorkelling and sunbathing. The second stop is Kona which lies

on the opposite side of the island to Hilo. Visit the historic

Park where you can explore calming fish ponds and early

most hotels are either located directly on the beach or

the sea. A walk along the Waikiki historical trail provides

an insight into the past by reading the surfboard markers

dotted along the way.

Pride of America will spend overnight in port here. Always

a difficult one to pronounce - kawhyeee. The island of

The port of Nawiliwili is your gateway to the what many

believe to be Hawaii's most beautiful island. It is known

as the garden island due to its dramatic emerald green

waterfalls. This island was the key location used for the

1993 film Jurassic Park and was also a key location for

Avatar and Pirates Of The Caribbean. Norwegian Cruise

Line offers an excursion called The Directors Cut which

takes you on a live narrated tour of famous movie locations

Pride of America will spend overnight in port here. Known

as the Magic Isle Maui is the second largest island. It

rainforests; it is also the home of the Luau featuring

Hawaiian foods such as kalua pig, cooked in an earthen

50th state of the USA in 1959. As a result they have become the ultimate destination when one thinks of an exotic beach holiday. Most people when travelling to Hawaii would expect

to pay thousands of pounds for a return flight and perhaps plan to stay on one island with the hope of exploring the others. A Hawaiian islands cruise however effortlessly opens up

the islands in one holiday without having to worry about flights and transportation between the islands. In much the same way as Greek Island hopping or Caribbean Island hopping. In

these locations the concept of cruising works perfectly enabling one to see multiple destinations in one holiday.

'Pride of America: reaches parts of Hawaii that other ships cannot reach!'