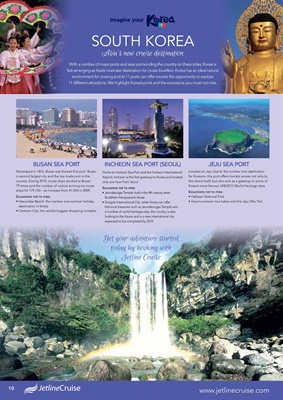 Home to Incheon Sea Port and the Incheon International

Airport, Incheon is the first gateway to Korea and located

only one hour from Seoul.

• Jeondeungsa Temple: built in the 4th century when

historical treasures such as Jeondeungsa Temple and

a number of world heritage sites, the country is also

looking to the future and is a new international city

expected to be completed by 2015

Located on Jeju Island, the number one destination

for Koreans, this port offers tourists access not only to

the island itself, but also acts as a gateway to some of

With a number of major ports and seas surrounding the country on three sides, Korea is

11 different attractions. We highlight Korea's ports and the excursions you must not miss.

Get your adventure started

today by booking with

is second largest city and the top trade port in the

79 times and the number of visitors arriving via cruise