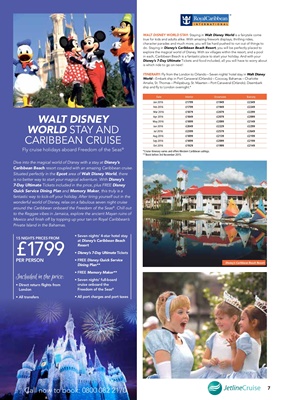 Fly cruise holidays aboard Freedom of the Seas®

Situated perfectly in the Epcot area of Walt Disney World, there

is no better way to start your magical adventure. With Disney's

7-Day Ultimate Tickets included in the price, plus FREE Disney

Quick Service Dining Plan and Memory Maker, this truly is a

fantastic way to kick-off your holiday. After tiring yourself out in the

around the Caribbean onboard the Freedom of the Seas®. Chill out

to the Reggae vibes in Jamaica, explore the ancient Mayan ruins of

Private Island in the Bahamas.

Freedom of the Seas®

• All port charges and port taxes

character parades and much more, you will be hard pushed to run out of things to

do. Staying in Disney's Caribbean Beach Resort, you will be perfectly placed to

explore the magical world of Disney. With six villages within the resort, and a pool

in each, Caribbean Beach is a fantastic place to start your holiday. And with your

Disney's 7-Day Ultimate Tickets and food included, all you will have to worry about

is which ride to go on next!

ship and fly to London overnight.*