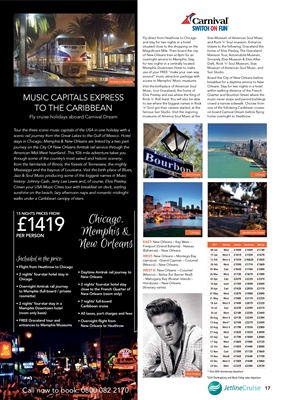 Fly direct from Heathrow to Chicago

and stay for two nights in a hotel

situated close to the shopping on the

Magnificent Mile. Then board the city

of New Orleans train at 8pm for an

for two nights in a centrally located

use of your FREE "make your own way

around" music attraction package with

Visit the birthplace of American Soul

Music, tour Graceland, the home of

Elvis Presley and see where the King of

Rock 'n' Roll lived. You will also be able

to see where the biggest names in Rock

'n' Soul got their careers started, at the

museums of America Soul Music at the

scenic rail journey from the Great Lakes to the Gulf of Mexico. Hotel

stays in Chicago, Memphis & New Orleans are linked by a two part

through some of the country's most varied and historic scenery;

from the farmlands of Illinois, the forests of Tennessee, the mighty

Mississippi and the bayous of Louisiana. Visit the birth place of Blues,

Jazz & Soul Music producing some of the biggest names in Music

sunshine on the beach, lazy afternoon naps and romantic midnight

walks under a Caribbean canopy of stars.

tickets to the following: Graceland the

home of Elvis Presley, The Graceland

Museum of American Soul Music, and

Board the City of New Orleans before

breakfast for a daytime service to New

Orleans. Stay for two nights in a hotel

within walking distance of the French

Quarter and Bourbon Street where the

crowd a narrow sidewalk. Choose from

one of the following Caribbean cruises

on board Carnival Dream before flying

• Flight from Heathrow to Chicago

close to the French Quarter of

• All taxes, port charges and fees