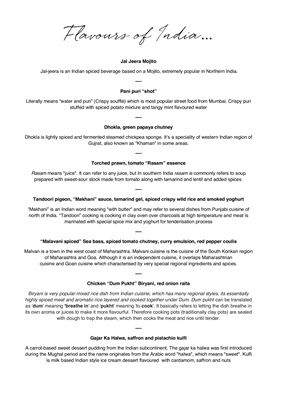 Jal-jeera is an Indian spiced beverage based on a Mojito, extremely popular in Northern India.

Dhokla is lightly spiced and fermented steamed chickpea sponge. It's a speciality of western Indian region of

Gujrat, also known as "Khaman" in some areas.

Rasam means "juice". It can refer to any juice, but In southern India rasam is commonly refers to soup

north of India. "Tandoori" cooking is cooking in clay oven over charcoals at high temperature and meat is

marinated with special spice mix and yoghurt for tenderisation process

Malvan is a town in the west coast of Maharashtra. Malvani cuisine is the cuisine of the South Konkan region

of Maharashtra and Goa. Although it is an independent cuisine, it overlaps Maharashtrian

cuisine and Goan cuisine which characterised by very special regional ingredients and spices.

Biryani is very popular mixed rice dish from Indian cuisine, which has many regional styles, its essentially

highly spiced meat and aromatic rice layered and cooked together under Dum. Dum pukht can be translated

as 'dum' meaning 'breathe in' and 'pukht' meaning 'to cook'. It basically refers to letting the dish breathe in

its own aroma or juices to make it more flavourful. Therefore cooking pots (traditionally clay pots) are sealed

with dough to trap the steam, which then cooks the meat and rice until tender.

A carrot-based sweet dessert pudding from the Indian subcontinent. The gajar ka halwa was first introduced

during the Mughal period and the name originates from the Arabic word "halwa", which means "sweet". Kulfi