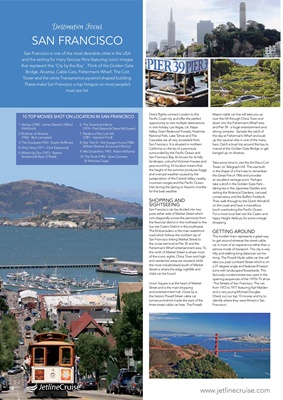 Direct flights connect London to this

National Park, Lake Tahoe and The

Cascades are all very accessible from

San Francisco. It is situated in northern

California on the tip of a peninsula

surrounded by the Pacific Ocean and

San Francisco Bay. It's known for its hilly

year-round fog. It's location means that

the height of the summer produces foggy

and overcast weather caused by the

juxtaposition of the Central Valley, nearby

mountain ranges and the Pacific Ocean.

Visit during the Spring or Autumn months

for the best weather.

San Francisco can be divided into two

parts either side of Market Street which

runs diagonally across the peninsula from

the financial district in the northeast to the

The Embarcadero is the main waterfront

road which follows the northern tip of

the cruise terminal at Pier 35 and the

the north of Market Street is where most

of the iconic sights, China Town and highend residential

areas are situated; while

the more industrialised south of Market

Street is where the edgy nightlife and

clubs can be found.

Union Square is at the heart of Market

Street and is the main shopping

and entertainment hub. Close by is

turnaround which marks the start of the

over the hill through China Town and

down into the Fisherman's Wharf area

and Pier 39 - a huge entertainment and

dining complex . Sample the catch of

the day at Fisherman's Wharf and soak

up the nautical vibe in one of the many

bars. Catch a boat trip around the bay to

marvel at the Golden Gate Bridge or get

banged up on Alcatraz.

Take some time to visit the Art Deco Coit

Tower on Telegraph Hill. This was built

in the shape of a fire hose to remember

the Great Fire of 1906 and provides

take a stroll in the Golden Gate Park -

taking tea in the Japanese Garden and

conservatory and the Buffalo Paddock.

Then walk through to the Dutch Windmill

on the coast and have a marvellous

For a more local feel visit the Castro and

hippy Haight Ashbury for some vintage

to get around whereas the street cable

car is more of an experience rather than a

serious mode of transport. This city is very

hilly and walking long distances can be

take you past Lombard Street which is on

a 27-degree angle and features 8 hairpin

turns with landscaped flowerbeds. This

famously crooked street was used in the

-The Streets of San Francisco. This ran

and a very young Michael Douglas.

Check out our top 10 movies and try to

identify where they were filmed in San

and the setting for many famous films featuring iconic images

that represent this 'City by the Bay' . Think of the Golden Gate

These make San Francisco a top hotspot on most people's

7: Raiders of the Lost Ark