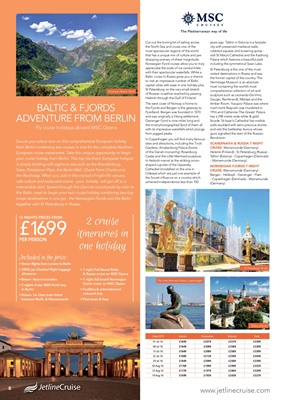 Cut out the boring bit of sailing across

the North Sea and cruise one of the

most spectacular regions of the world

that has a unique mix of culture and jaw

with their spectacular waterfalls. While a

Baltic cruise to Russia gives you a chance

to visit an impressive number of Baltic

capital cities with ease in one holiday plus

of Russian coastline reached by passing

Helsinki through the Gulf of Finland.

The west coast of Norway is home to

the Fjords and Bergen is the gateway to

Fjordland. Bergen was founded in 1070

and was originally a Viking settlement.

the most photographed fjord of them all

with its impressive waterfalls which plunge

In Copenhagen you will find many famous

sites and attractions, including the Tivoli

of the Danish monarchy), Rosenborg

Castle and the Little Mermaid sculpture.

In Helsinki marvel at the striking onionshaped cupolas of the Uspensky

Cathedral (modelled on the one in

Odessa) which are just one example of

the Soviet influence on a country which

Secure your place now on this comprehensive European holiday

from Berlin combining two cruises in one for the complete Northern

your cruise holiday from Berlin. This top Northern European hotspot

is simply bristling with sights to see such as the Brandenburg

the Reichstag. When you add in the myriad of night life venues,

memorable start. Speed through the German countryside by train to

cruise destinations in one go - the Norwegian Fjords and the Baltic

together with St Petersburg in Russia.

years ago. Tallinn in Estonia is a fairytale

Palace which features a beautiful park

including the symmetrical Swan Lake.

St Petersburg is the one of the most

visited destinations in Russia and was

the former capital of the country. The

Hermitage Museum is an absolute

must containing the world's most

comprehensive collection of art and

Gaugin, Rembrandt, Matisse and the

Amber Room. Yusupov Palace was where

mad monk Rasputin was murdered in

and visit the battleship Aurora whose

guns signalled the start of the Russian

• Return flights from London to Berlin