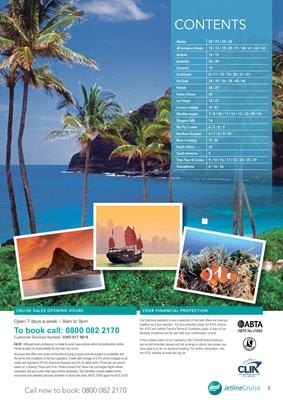 Upon arrival in Buenos Aires transfer by

private car to the port and embark the ms

Buenos Aires has been the gateway

to Argentina for centuries; this stylish,

energetic port city is rich in culture and

history and well worth exploring

Nearby: Colonia del Sacramento, the

Stanley is the only town in the sparsely

pub, take a walk across the moorlands and

see penguins of every type.

Enjoy a day of cruising through the Strait of

Magellan, a natural passage that links the

- Scenic Cruising: From Punta Arenas you

can venture to the high scarps of Torres

colony at Seno Otway, or the Martian

Park. Look out for wildlife and enjoy

spectacular scenery as you cruise through

the narrow waterways of the Cockburn

and Beagle channel's as you head towards

southernmost town in the world, where

the fourth opens to the Beagle Channel,

treacherous rock at continent's end, and

until the Panama Canal was constructed,

this was the main shipping route from the

Atlantic to the Pacific.

This luxury fourteen-night cruise begins in Buenos Aires, the

birthplace of poets, composers and a dance called Tango; a city with

European flair and a Latin heartbeat. Then cruise to the ends of the

earth through the Cockburn and Beagle Channel's as you make your

way to Ushuaia, the southernmost town in the world. Prepare to have

your breath taken away by the mesmerising beauty of the Chilean

Fjords and marvel at unusual rock formations and imposing granite

cliffs as you enjoy scenic cruising around Cape Horn. At the end of

your cruise you will spend a night in Santiago Chile, a lush, irresistible

tangle of serpentine streets, steep hills and the famous ascensores.

cruising: Be among the lucky few to spend

a glorious day scenic cruising through

Tierra del Fuego and the snow-capped

waterway is surrounded by other-worldly

Fjords more spectacular than those in

Norway or Alaska? See them here along

the southern coastline of Chile . . . a

glistening glaciers and more fjords than in

to the scenic Lake District, a series of

After breakfast onboard disembark and

transfer by private car to a 4-star centrally

located hotel in Santiago. Afternoon and

evening at leisure to explore Santiago.

Day 17 - Santiago, Chile: Check out from

your hotel and transfer to Santiago airport

for your overnight flight back to London

• All transfers by private car

Catch up on the latest cruise industry news

alterations to Norwegian Jade and

cruise line increases the variety in its cruise

product by adding new destinations in the

Mediterranean and offering an expanded

Jade, the first NCL-ship based in Hamburg,

will offer a series of cruises from Hamburg

for those looking to embark in Germany

in June and July as well as a number of

throughout the summer season. The

ship will set sail from Hamburg on three

12-night North Cape sailings and one

ship will also call in Hamburg on September

9 as part of the Hamburg Cruise Days

and join the spectacular parade. From

Southampton, in addition to one European

Capitals cruise, the ship will embark on

departing Southampton in May and two

in August and September. Norwegian

Spirit will redeploy to her new seasonal

homeport of Civitavecchia (Rome) in early

May and sail a series of different 10- and

11-night cruises including stops in smaller

ports such as Cagliari in Sardinia, Palma de

Majorca, Koper or Malta as well as three

overnight in Haifa. On the announcement,

delighted that thanks to these new

itineraries, we are in a position to offer our

clients an even wider choice of cruises to

Europe's most beautiful ports from Iceland

in the North to the Canaries in the South."

will go live in August.

from Spain to Russia with P&O Cruises

P&O Cruises in 2017 for more dazzling

performances across the Med and Baltic

from some of your favourite professional

dancers and the outspoken judges everyone

loves to hate. Guests can sit back and enjoy

the sizzling shows, or get in on the action

and try the Tango, Quickstep or Salsa. P&O

said: "We are the only holiday company

to have this partnership with one of the

themed cruises appeal to people who can

dance, want to learn to dance or just like to

admire the glitz and glamour in person."

· A 14-night Baltic cruise on Britannia

The Strictly professional dancers and

judges who will be on board each cruise

will be announced later in the year. In

association with BBC Worldwide, each

cruise will feature a guest judge and four

of the BBC's show's favourite professional

dancers with the opportunity to meet them

and maybe learn a move or two from the

experts themselves during the regular

dance classes on board. The Strictly team

will offer up close and personal interviews

on board, photo and meet and greet

Cruises will also be joined by a team

of dresses and costumes to the show.

A stunning selection of these costumes

will be on display around the ship, and

available to buy, with organised fashion

events to showcase them at their very best.

The highlight of the two-week cruises is

the passenger dance competition which

culminates in a grand finale performance

in the ship's main theatre, with a judging

panel including a Strictly professional

Europe for the 2017 summer season

cocktail bar has announced a revised

cocktail menu which shares 'the

unique story of the Knighted Cunard

Commodores'. The cruise line said that

its gifted onshore and on-board bar

teams have created these drinks by

reflect the appeal of 'these celebrated

men'. Every historical and decorated

chronicle, the line continued, is instilled

into the cocktail experience with the

The press release continued: "These new

and fresh additions to the renowned bar,

found in prime locations on each of the

craftsmanship that has gone into each

drink." A perfect example is the new

believed to be the last beverage ever

served on the ill-fated Titanic. This mix

was inspired by Commodore Sir Arthur

Rostron, who was in charge of the rescue

attempt, and features Advocaat as its

forces with illustrator Lauren Crowe to

bring to life these famous personalities,

President, said with over 176-years of

cruise history, the line has continued to

be recognised globally as a pioneer in

exploring the earth. He added Cunard

was proud to recognise seven of the

most honoured Cunard Commodores in

Commodore Club, men who have been

in charge of Cunard flagships and fleets

during its glorious history. Meadows

and history, each cocktail has been

thoughtfully created to honour their

to honour the Commodores