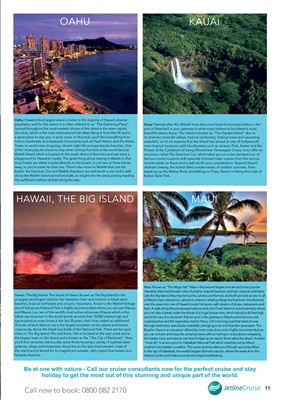 Oahu: Hawaii's third largest island is home to the majority of Hawaii's diverse

population and for this reason it is often referred to as "The Gathering Place".

Spread throughout the south-eastern shores of the island is the state capital,

Honolulu, which is the main international hub when flying in from the UK and is

a great place to stay pre, or post cruise. In Honolulu you'll find everything from

Tower, to world-class shopping, vibrant night-life and spectacular beaches. One

playground for Hawaiian royalty. The great thing about staying in Waikiki is that

most hotels are either located directly on the beach, or just two or three blocks

away, so you're never far from sea. There's also more to Waikiki than just the

beach, the Honolulu Zoo and Waikiki Aquarium are well worth a visit and a walk

the surfboard markers dotted along the way.

Kauai: Named after the Wiliwili trees that once lined its stunning harbour, the

beautiful island, Kauai. The Island is known as "The Garden Island" due to

waterfalls; so it's no surprise that the Island has served as one of Hollywood's

main tropical locations, with blockbusters such as Jurassic Park, Avatar and the

Pirates of the Caribbean all being filmed here. Norwegian Cruise Lines offer an

excursion called The Directors Cut, which takes you on a live narrated tour of

movies made on Kauai and is well worth your consideration. Beyond Kauai's

dramatic beauty, the island offers a wide variety of outdoor activities, from

kayaking up the Wailua River, snorkelling on Poipu Beach or hiking the trails of

beaches, tropical rainforests and volcanic mountains. A visit to the World Heritage

and Mauna Loa, two of the world's most active volcanoes; Kilauea which is the

tallest sea mountain in the world stands at more than 10,000 metres high and

has erupted so many times in the last 20 years, that it has added an additional

70 acres of land. Mauna Loa is the largest mountain on the planet and towers

imperiously above the bleak lava fields of the National Park. There are two port

cities on The Big Island, Hilo and Kona. Hilo is located on the east coast and is

the largest town on the Island and is known as the "The City of Rainbows". Here,

galleries, shops and restaurants. Kona lies on the lava-lined western coast of

the island and is famed for its magnificent sunsets, calm crystal blue waters and

Maui: Known as "The Magic Isle" Maui is the second largest and second most popular

Like the Big Island, Maui has two ports, Lahaina and Kahului and both provide access to all

of Maui's major attractions. Lahaina is a historic whaling village that has been transformed

over the years into one of Hawaii's tourist hot spots, with dozens of shops, restaurants and

bars. A walk along the picturesque harbour and onto Front Street is recommended, where

you can take a break under the shade of a huge banyan tree, which stands at 60-feet high

and is the size of a city block! Kahului port is the gateway to Maui's world-famous east

coast beaches and the legendary road to Hana, a 52 mile long road that twists its way

through rainforests, spectacular waterfalls, plunging pools and dramatic seascapes. The

Road to Hana is an excursion offered by most cruise lines and is highly recommended, as

the hairpin turns and narrow one lane bridges as an expert driver takes the wheel. Another

southern and eastern coastline. This scenic journey takes you through upcountry Maui

to the top of Haleakala, the world's largest dormant volcano, where the views from the

holiday to get the most out of this stunning and unique part of the world.