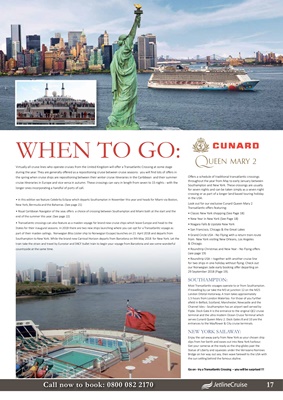 WHEN TO GO: Offers a schedule of traditional transatlantic crossings

throughout the year from May to early January between

Southampton and New York. These crossings are usually

crossing or as part of a longer land based touring holiday

Look out for our exclusive Cunard Queen Mary 2

• Grand Circle USA - No Flying with a return train route

• Roundtrip USA - together with another cruise line

for two ships in one holiday without flying. Check out

Most Transatlantic voyages operate to or from Southampton.

1.5 hours from London Waterloo. For those of you further

afield in Belfast, Scotland, Manchester, Newcastle and the

Channel Isles - Southampton has an airport well served by

Flybe. Dock Gate 4 is the entrance to the original QE2 cruise

terminal and the ultra modern Ocean Cruise Terminal which

serves Cunard Queen Mary 2. Dock Gates 8 and 10 are the

slips from her berth and eases out into New York harbour.

Statue of Liberty and squeezes under the Verrazano Narrows

Bridge on her way out sea, then wave farewell to the USA with

the sun setting behind the famous skyline.

Go on - try a Transatlantic Crossing - you will be surprised !!!

during the year. They are generally offered as a repositioning cruise between cruise seasons: you will find lots of offers in

cruise itineraries in Europe and vice versa in autumn. These crossings can vary in length from seven to 15 nights - with the

longer ones incorporating a handful of ports of call.

• In this edition we feature Celebrity Eclipse which departs Southampton in November this year and heads for Miami via Boston,

States for their inaugural seasons. In 2018 there are two new ships launching where you can opt for a Transatlantic voyage as

part of their maiden sailings. Norwegian Bliss (sister ship to Norwegian Escape) launches on 21 April 2018 and departs from

Southampton to New York. While the brand new Carnival Horizon departs from Barcelona on 9th May 2018 for New York. Let the

countryside at the same time.