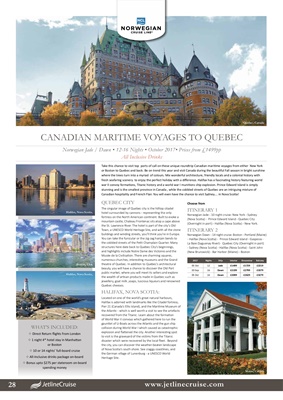 The singular image of Quebec city is the hilltop citadel

hotel surrounded by cannons - representing the only

fortress on the North American continent. Built to evoke a

mountain castle, Chateau Frontenac sits atop a cape above

the St. Lawrence River. The hotel is part of the city's Old

Town, a UNESCO World Heritage Site, and with all the stone

buildings and winding streets, you'll think you're in Europe.

the cobbled streets of the Petit Champlain Quarter. Many

and highlights include Notre Dame des Victoires and the

theatre of Quebec. In addition to Quebec's architectural

beauty, you will have a chance to discover the Old Port

public market, where you will meet its sellers and explore

the wealth of artisan products made in Quebec such as

Located on one of the world's great natural harbours,

Halifax is adorned with landmarks like the Citadel fortress,

Pier 21 (Canada's Ellis Island), and the Maritime Museum of

recovered from the Titanic. Learn about the formation

of World War II convoys which gathered here to run the

gauntlet of U-Boats across the Atlantic and the gun ship

collision during World War I which caused as catastrophic

explosion and flattened the city. Another interesting spot

to visit is the graveyard of the victims from the Titanic

disaster which were recovered by the local fleet. Beyond

the city, you can discover the weather-beaten landscape

the German village of Lunenburg - a UNESCO World

or Boston to Quebec and back. Be on trend this year and visit Canada during the beautiful Fall season in bright sunshine

where the trees turn into a myriad of colours. Mix wonderful architecture, friendly locals and a colonial history with

fresh seafaring scenery to enjoy the perfect holiday with a difference. Halifax has a fascinating history featuring world

stunning and is the smallest province in Canada , while the cobbled streets of Quebec are an intriguing mixture of

Canadian hospitality and French Flair. You will even have the chance to visit Sydney.... in Nova Scotia!