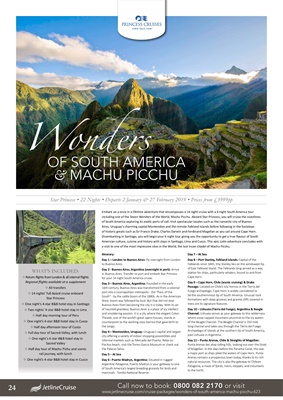 in Buenos Aires. Transfer to port and embark Star Princess

for your 14 night South America cruise.

16th century, Buenos Aires was transformed from a colonial

port into a cosmopolitan metropolis - the "Paris of the

West, boom was followed by bust. But that did not stop

Buenos Aires from becoming the city it is today. With its air

of haunted grandeur, Buenos Aires is a place of icy intellect

and smoldering passion. It is a city where the elegant Colon

Theater, one of the world's great opera houses, stands in

counterpoint to the working class barrios that gave birth to

city offering a variety of indoor shopping possibilities and

informal markets such as Mercado del Puerto. Relax on

Pocitos beach, visit the Torres Garcia Museum or check out

Argentine Patagonia, Puerto Madryn is your gateway to one

of South America's largest breeding grounds for birds and

✥ Half day tour of Machu Pichu and scenic

including one of the Seven Wonders of the World, Machu Picchu. Aboard Star Princess, you will cruise the coastlines

of South America exploring its exotic ports of call. Visit spectacular locales such as the romantic city of Buenos

Aires, Uruguay's charming capital Montevideo and the remote Falkland Islands before following in the footsteps

of historic greats such as Sir Francis Drake, Charles Darwin and Ferdinand Magellan as you sail around Cape Horn.

Disembarking in Santiago, you will begin your 6 night tour giving you the opportunity to get a true flavour of South

American culture, cuisine and history with stays in Santiago, Lima and Cusco. This epic Latin adventure concludes with

a visit to one of the most impressive sites in the World, the lost Incan citadel of Machu Picchu.

Falklands since 1845, tiny Stanley lies on the windswept tip

of East Falkland Island. The Falklands long served as a way

station for ships, particularly whalers, bound to and from

Passage: Located on Chile's Isla Hornos in the Tierra del

be the southernmost tip of South America. Unusual rock

formations with deep grooves and granite cliffs covered in

trees are its signature features.

Channel: Ushuaia serves as your gateway to this wilderness

where snow-capped mountains plummet to the icy waters

long channel and takes you through the Tierra del Fuego

Archipelago of islands at the southern tip of South America,

past Ushuaia in Argentina.

Punta Arenas lies atop rolling hills, looking out over the Strait

of Magellan. In the days before the Panama Canal, this was

a major port as ships plied the waters of Cape Horn. Punta

Arenas remains a prosperous town today, thanks to its rich

natural resources. The city is also the gateway to Chilean

Patagonia, a maze of fjords, rivers, steppes, and mountains