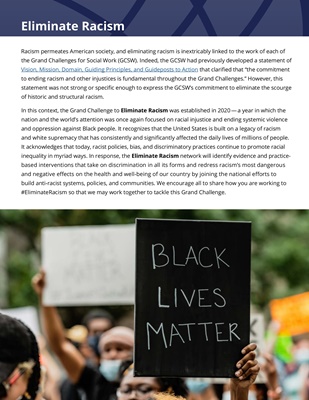 Racism permeates American society, and eliminating racism is inextricably linked to the work of each of

the Grand Challenges for Social Work (GCSW). Indeed, the GCSW had previously developed a statement of

Vision, Mission, Domain, Guiding Principles, and Guideposts to Action that clarified that "the commitment

to ending racism and other injustices is fundamental throughout the Grand Challenges." However, this

of historic and structural racism.

In this context, the Grand Challenge to Eliminate Racism was established in 2020 - a year in which the

and oppression against Black people. It recognizes that the United States is built on a legacy of racism

and white supremacy that has consistently and significantly affected the daily lives of millions of people.

inequality in myriad ways. In response, the Eliminate Racism network will identify evidence and practicebased interventions that take on discrimination in all its forms

and redress racism's most dangerous

build anti-racist systems, policies, and communities. We encourage all to share how you are working to

#EliminateRacism so that we may work together to tackle this Grand Challenge.