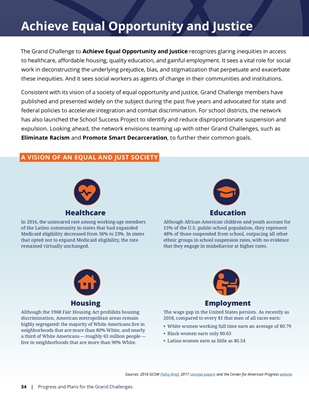 to healthcare, affordable housing, quality education, and gainful employment. It sees a vital role for social

work in deconstructing the underlying prejudice, bias, and stigmatization that perpetuate and exacerbate

these inequities. And it sees social workers as agents of change in their communities and institutions.

Consistent with its vision of a society of equal opportunity and justice, Grand Challenge members have

federal policies to accelerate integration and combat discrimination. For school districts, the network

expulsion. Looking ahead, the network envisions teaming up with other Grand Challenges, such as

A VISION OF AN EQUAL AND JUST SOCIETY

The wage gap in the United States persists. As recently as

In 2016, the uninsured rate among working-age members

of the Latino community in states that had expanded

Medicaid eligibility decreased from 36% to 23%. In states

that opted not to expand Medicaid eligibility, the rate

15% of the U.S. public-school population, they represent

48% of those suspended from school, outpacing all other

ethnic groups in school suspension rates, with no evidence

that they engage in misbehavior at higher rates.

highly segregated: the majority of White Americans live in

neighborhoods that are more than 80% White, and nearly

live in neighborhoods that are more than 90% White.

34 | Progress and Plans for the Grand Challenges