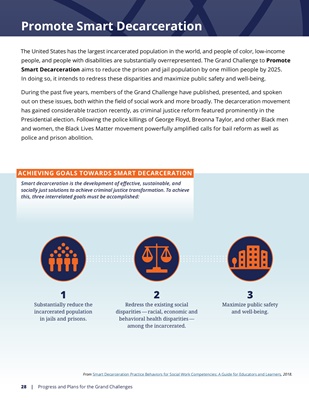 The United States has the largest incarcerated population in the world, and people of color, low-income

people, and people with disabilities are substantially overrepresented. The Grand Challenge to Promote

Smart Decarceration aims to reduce the prison and jail population by one million people by 2025.

In doing so, it intends to redress these disparities and maximize public safety and well-being.

During the past five years, members of the Grand Challenge have published, presented, and spoken

out on these issues, both within the field of social work and more broadly. The decarceration movement

has gained considerable traction recently, as criminal justice reform featured prominently in the

and women, the Black Lives Matter movement powerfully amplified calls for bail reform as well as

Smart decarceration is the development of effective, sustainable, and

this, three interrelated goals must be accomplished:

From Smart Decarceration Practice Behaviors for Social Work Competencies: A Guide for Educators and Learners, 2018.

in jails and prisons.

28 | Progress and Plans for the Grand Challenges