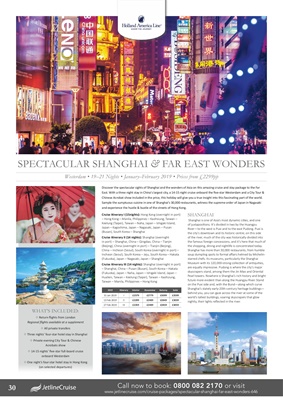 East. With a three night stay in China's largest city, a 14-15 night cruise onboard the five-star Westerdam and a City Tour &

Chinese Acrobat show included in the price, this holiday will give you a true insight into this fascinating part of the world.

Sample the sumptuous cuisine in one of Shanghai's 30,000 restaurants, witness the supreme order of Japan in Nagasaki

and experience the hustle & bustle of the streets of Hong Kong. SHANGHAI

Shanghai is one of Asia's most dynamic cities, and one

of juxtapositions. It's divided in two by the Huangpu

River-to the west is Puxi and to the east Pudong. Puxi is

the city's downtown and its historic centre; on this side

of the river, much of the city was historically divided into

the famous foreign concessions, and it's here that much of

the shopping, dining and nightlife is concentrated today.

Shanghai has more than 30,000 restaurants, from humble

chefs. Its museums, particularly the Shanghai

Museum with its 120,000-strong collection of antiquities,

are equally impressive. Pudong is where the city's major

skyscrapers stand, among them the Jin Mao and Oriental

future more evident than along the Huangpu River. Stand

on the Puxi side and, with the Bund-along which curve

behind you, you can gaze across the river at some of the

nightly, their lights reflected in the river.