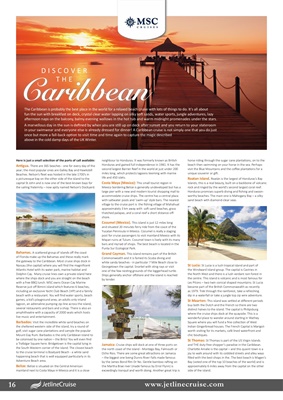 neighbour to Honduras. It was formerly known as British

Honduras and gained full independence in 1981. It has the

second largest Barrier Reef in the world at just under 200

Mexico bordering Belize is generally undeveloped but has a

large pier with a new and modern tourist shopping mall to

accommodate cruise ships. The centre has a central plaza

with saltwater pools and 'swim-up' style bars. The nearest

village to the cruise port is the fishing village of Mahahual

thatched palapas, and a coral reef a short distance offshore.

and situated 20 minutes ferry ride from the coast of the

Yucatan Peninsula in Mexico. Cozumel is really a staging

post for cruise passengers to visit mainland Mexico with its

Mayan ruins at Tulum. Cozumel town is lively with its many

bars and myriad of shops. The best beach is located in the

Grand Cayman. This island remains part of the British

Commonwealth and it is famed its Scuba diving and

Georgetown the capital. Snorkel with sting rays or visit

one of the few nesting grounds of the loggerhead turtle.

Ships generally anchor offshore and the island is reached

Jamaica: Cruise ships will dock at one of three ports on

the north coast of the island - Montego Bay, Falmouth or

Ocho Rios. There are some great attractions on Jamaica

- the biggest one being Dunns River Falls made famous

by the James Bond film Dr No. Gentle bamboo rafting on

the Martha Brae river (made famous by Errol Flynn) is

exceedingly tranquil and worth doing. Another great trip is

Here is just a small selection of the ports of call available:

Antigua. There are 365 beaches - one for every day of the

year; the most popular ones are Galley Bay and Hawksbill

Beaches. Nelson's fleet was hosted in the late 1700's in

Bahamas. A scattered group of islands off the coast

of Florida make up the Bahamas and these really mark

the gateway to the Caribbean. Most cruise ships dock in

Nassau (the capital) where you will find the magnificent

Atlantis Hotel with its water park, marine habitat and

Dolphin Cay. Many cruise lines own a private island here

where the ships dock and you are straight on the beach

including an exclusive Yacht Club Beach (VIP) and a family

beach with a restaurant. You will find water sports, beach

games, a kid's playground area, an adults only inland

lagoon, an adrenaline pumping zip-line across the island,

several restaurants and bars and a shop. There is also an

amphitheatre with a capacity of 2000 seats which hosts

the sheltered western side of the island, try a round of

Mount Gay Rum. Barbados is the only Caribbean Island to

be colonised by one nation - the Brits! You will even find

a Trafalgar Square here. Bridgetown is the capital lying in

the South Western corner of the island. The closest beach

to the cruise terminal is Boatyard Beach - a white sand

happening beach that is well equipped particularly in its

Belize: Belize is situated on the Central American

horse riding through the sugar cane plantations, on to the

beach then swimming on your horse in the sea. Perhaps

visit the Blue Mountains and the coffee plantations for a

Roatan Island. Roatán is the largest of Honduras's Bay

Islands, this is a real beauty, built on a backbone of volcanic

rock and ringed by the world's second largest coral reef.

beaches. The main one is Mahogany Bay - a silky

St Lucia: St Lucia is a lush tropical island and part of

the Windward Island group. The capital is Castries in

the centre. This island is volcanic and is most famous for

became part of the British Commonwealth as recently

as 1979. Trek through the rainforest, take a refreshing

dip in a waterfall or take a jungle top zip wire adventure.

St Maarten: This island was settled at different periods

buy both the Dutch and the French so there are two

distinct halves to the island. The capital is Philipsburg

where the cruise ships dock at the quayside. This is a

wonderful place to wander around starting in Wathey

Square where you will fund a fine collection of West

worth visiting for its markets, café lined waterfront and

St Thomas: St Thomas is part of the US Virgin Islands

and THE duty-free shopper's paradise in the Caribbean.

Charlotte Amalie is the capital - and this quaint town is a

joy to walk around with its cobbled streets and alley ways

filled with the best shops in the. The best beach is Magen's

approximately 6 miles away from the capital on the other

side of the island.

The Caribbean is probably the best place in the world for a relaxed beach cruise with lots of things to do. It's all about

afternoon naps on the balcony, balmy evening wallows in the hot tub and warm midnight promenades under the stars.

in your swimwear and everyone else is already dressed for dinner! A Caribbean cruise is not simply one that you do just

above in the cold damp days of the UK Winter.