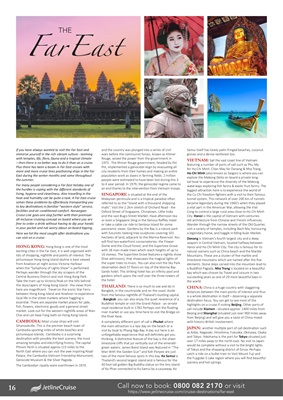 If you have always wanted to visit the Far East and

immerse yourself in the rich vibrant culture - teeming

with temples, life, flora, fauna and a tropical climate

- then there is no better way to do it than on a cruise.

Plus there has been a boom in Far East cruises with

more and more cruise lines positioning ships in the Far

East during the winter months and some throughout

For many people considering a Far East holiday one of

the hurdles is coping with the different standards of

living, hygiene and cleanliness. Also travelling in the

heat and humidity can be quite a task. A Far East cruise

solves these problems by effortlessly transporting you

Cruise Line goes one step further with their premium

all-inclusive cruising concept on board where you are

free to order a drink without having to dip your hands

in your pocket and not worry about on-board tipping.

Here we list the most sought after destinations you

can visit on a cruise:

HONG KONG: Hong Kong is one of the most

exciting cities in the Far East, it is well organised with

lots of shopping, nightlife and points of interest. The

from Kowloon at night across Victoria Harbour

when the "Symphony of Lights Show" is performed.

Perhaps wander through the sky scrapers of the

Take the tram up to Victoria Peak on the hills behind

the skyscrapers of Hong Kong Island - the views from

here are magnificent. Travel on the iconic Star Ferry

between Hong Kong Island and Kowloon to experience

local life in the street markets where haggling is

essential. There are separate market places for jade,

market. Look out for the western nightlife areas of Wan

Chai and Lan Kwai Fong both on Hong Kong Island.

CAMBODIA: Most cruise ships will visit

Sihanoukville. This is the premier beach town of

picturesque islands. Cambodia is a surprising

destination with possibly the best scenery, the most

Phnom Penh is situated approx 115 miles to the

North East where you can visit the awe inspiring Royal

The Cambodian royalty were overthrown in 1970

and the country was plunged into a series of civil

wars before the communist forces, known as Khmer

Rouge, seized the power from the government in

Pot, implemented a genocidal reign by evacuating all

city residents from their homes and making an entire

people were estimated to have been lost during this 3

an end thanks to the intervention from Vietnam troops.

SINGAPORE is situated at the end of the

Malaysian peninsula and is a tropical paradise often

referred to as the "Island with a thousand shopping

malls". Visit the 2.2km stretch of Orchard Road - the

and the vast Bugis Street Market. Have afternoon tea

or even a Singapore Sling in the famous Raffles Hotel

or take a cable car ride to Sentosa Island for some

panoramic views. Gardens by the Bay is a nature park

hectares of land, adjacent to the Marina Reservoir. You

Dome and the Cloud Forest; and the Supertree Grove

with 18 man-made trees which reach heights of up to

(free admission), that showcases the magical lights of

the super trees to music. You can also visit the Sky Park

observation deck 57 floors on top of the Marina Bay

Sands hotel. This striking hotel has an infinity pool and

gardens which spans the roof over the three towers of

THAILAND: There is so much to see and do in

Bangkok, in the countryside and on the coast. Aside

from the famous nightlife of Thailand's bustling capital

- Bangkok you can also enjoy the quiet reverence of a

Buddhist temple or visit the Grand Palace - an ornate

A completely different port of call is Phuket where

visit by boat to Phang Nga Bay. A day out here is an

unforgettable experience that will definitely get you

thinking. A distinctive feature of the bay is the sheer

limestone cliffs that jut vertically out of the emeraldgreen

waters. James Bond Island was featured in "The

Man With the Golden Gun" and Koh Panyee are just

two of the more famous spots in this bay. Ko Samui is

Thailand's second largest island and is famous for the

of Ko Phan connected to Ko Samui by a causeway. Ko

groves and a dense rainforest too.

featuring a number of ports of call such as Phu My

for Ho Chi Minh, Chan May for Danang & Nha Trang.

Ho Chi Minh (also known as Saigon) is where you can

explore the Mekong Delta on board a private longtail

boat to experience the diversity of the Mekong

biggest attraction here is to experience the world of

the Cu Chi freedom fighters with a visit to their famous

tunnel system. This network of over 200 km of tunnels

became legendary during the 1960's when they played

a vital part in the American War, allowing the Viet

City. Hanoi is the capital of Vietnam with centuriesold architecture

from Chinese and French influences.

Wander through the narrow streets of the Old Quarter,

visit a variety of temples, including Bach Ma, honouring

a legendary horse, and haggle in Đõng Xuân Market.

Danang is Vietnam's fourth largest city and a deep

Hanoi and Ho Chi Minh City. The city is famous for its

natural scenery such as China beach and the Marble

Mountains. These are a cluster of five marble and

limestone mountains which are named after the five

elements. Stone steps carved into the mountain lead to

a Buddhist Pagoda. Nha Trang is located on a beautiful

bay which was chosen by Travel and Leisure in two

succeeding years as one of 29 most beautiful bays in

CHINA: China is a huge country with staggering

distances between the main points of interest and thus

is a whole destination in itself - deserving a separate

destination focus. You can get to see most of the

highlights on a cruise if visiting Beijing. Other ports of

Beijing and Shanghai (situated just over 900 miles away

from Beijing) and will give you a taste of China mixed

JAPAN: another multiple port of call destination such

and Tokyo. Yokohama is the port for Tokyo situated just

over 17 miles away to the north east. No visit to Japan

would be complete without a visit to the bright lights

of Tokyo and the shopping district of Ginza. Perhaps

the Fujigoko 5 Lake region where you will find beautiful