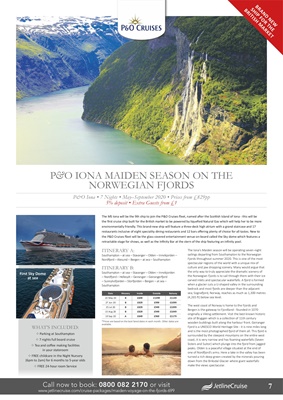 P&O IONA MAIDEN SEASON ON THE

The MS Iona will be the 9th ship to join the P&O Cruises fleet, named after the Scottish Island of Iona - this will be

environmentally friendly. This brand-new ship will feature a three-deck high atrium with a grand staircase and 17

restaurants inclusive of eight speciality dining restaurants and 12 bars offering plenty of choice for all tastes. New to

retractable stage for shows, as well as the Infinity Bar at the stern of the ship featuring an infinity pool.

Date Itinerary Inside Outside Balcony

*Prices are based on the best fared dates in each month. Other dates are

The Iona's Maiden season will be operating seven-night

sailings departing from Southampton to the Norwegian

Fjords throughout summer 2020. This is one of the most

spectacular regions of the world with a unique mix of

culture and jaw dropping scenery. Many would argue that

the only way to truly appreciate the dramatic scenery of

the Norwegian Fjords is to sail through them with their ice

carved inlets and spectacular waterfalls. A fjord is formed

when a glacier cuts a U-shaped valley in the surrounding

bedrock and most fjords are deeper than the adjacent

sea; Sognefjord, Norway, reaches as much as 1,300 metres

The west coast of Norway is home to the Fjords and

Bergen is the gateway to Fjordland - founded in 1070

site of Bryggen which is a collection of 11th century

and is the most photographed fjord of them all. This fjord is

surrounded by the steepest mountains on the entire west

coast, it is very narrow and has foaming waterfalls (Seven

Sisters and Suitor) which plunge into the fjord from jagged

peaks. Olden is a peaceful village situated at the end of

one of Nordfjord's arms. Here a lake in the valley has been

turned a rich deep green created by the minerals pouring

down from the Briksdal Glacier where giant waterfalls