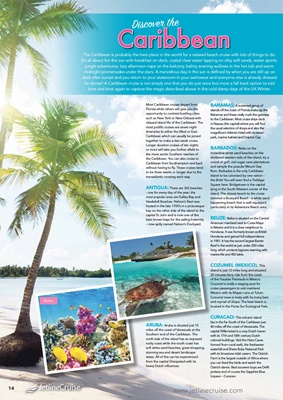 Most Caribbean cruises depart from

Florida while others will give you the

such as New York or New Orleans with

relaxed island life of the Caribbean. The

most prolific cruises are seven night

itineraries to either the West or East

Caribbean which can usually be joined

together to make a two week cruise.

or more will take you further afield to

the more exotic Southern reaches of

the Caribbean. You can also cruise to

Caribbean from Southampton and back

without having to fly. These cruises tend

to be three weeks or longer due to the

ANTIGUA: There are 365 beaches

- one for every day of the year; the

most popular ones are Galley Bay and

hosted in the late 1700's in a picturesque

bay on the other side of the island to the

capital St John and is now one of the

miles off the coast of Venezuela at the

Southern end of the Caribbean. The

north side of the island has an exposed

rocky coast while the south coast has

views. All of this can be experienced

from the capital Oranjestad with its

BAHAMAS: A scattered group of

islands off the coast of Florida make up the

Bahamas and these really mark the gateway

to the Caribbean. Most cruise ships dock

in Nassau (the capital) where you will find

the usual selection of shops and also the

magnificent Atlantis Hotel with its water

BARBADOS: Relax on the

incredible white sand beaches on the

sheltered western side of the island, try a

and sample the popular Mount Gay

Rum. Barbados is the only Caribbean

Island to be colonised by one nation -

the Brits! You will even find a Trafalgar

Square here. Bridgetown is the capital

lying in the South Western corner of the

island. The closest beach to the cruise

happening beach that is well equipped

particularly in its Adventure Beach area.

BELIZE: Belize is situated on the Central

American mainland next to Costa Maya

in Mexico and it is a close neighbour to

Honduras. It was formerly known as British

in 1981. It has the second largest Barrier

Reef in the world at just under 200 miles

long, which protects lagoons teeming with

20 minutes ferry ride from the coast

of the Yucatan Peninsula in Mexico.

Mexico with its Mayan ruins at Tulum.

Cozumel town is lively with its many bars

and myriad of shops. The best beach is

lies in the far South of the Caribbean just

40 miles off the coast of Venezuela. The

with its 17th and 18th century Dutch

formed from coral reefs, the freshwater

with its limestone tidal cavern. The Ostrich

Farm is the largest outside of Africa where

you can feed the birds and watch the

pottery and of course the Sapphire Blue

The Caribbean is probably the best place in the world for a relaxed beach cruise with lots of things to do.

It's all about fun the sun with breakfast on deck, crystal clear water lapping on silky soft sands, water sports,

midnight promenades under the stars. A marvellous day in the sun is defined by when you are still up on

for dinner! A Caribbean cruise is not simply one that you do just once but more a fall back option to visit

time and time again to capture the magic described above in the cold damp days of the UK Winter.