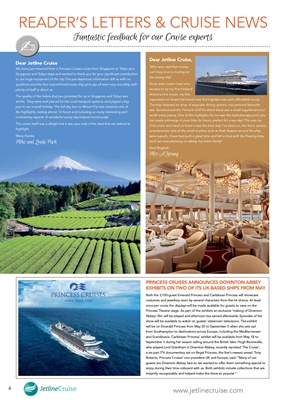 to our huge enjoyment of the trip.the pre-departure information left us with no

plenty of staff to direct us.

terrific. They were well placed for the local transport systems and played a big

part in our overall holiday. The full day tour to Mount Fuji was certainly one of

the highlights, lasting almost 13 hours and including so many interesting and

EXHIBITS ON TWO OF ITS UK-BASED SHIPS FROM MAY

Both the 3,100-guest Emerald Princess and Caribbean Princess will showcase

costumes and jewellery worn by several characters from the hit drama. At least

Princess Theatre stage. As part of the exhibits an exclusive 'making of Downton

Abbey' film will be played and afternoon tea served afterwards. Episodes of the

show will be available to watch on guests' stateroom televisions. The exhibit

from Southampton to destinations across Europe, including the Mediterranean

and Scandinavia. Caribbean Princess' exhibit will be available from May 18 to

September 3 during her season sailing around the British Isles. Hugh Bonneville,

Roberts, Princess Cruises' vice president UK and Europe, said: "Many of our

enjoy during their time onboard with us. Both exhibits include collections that are

instantly recognisable and helped make the show so popular."

'Who ever said that money

can't buy love is cruising on

As an avid cruiser I was very

excited to try my first Holland

impression on board the brand new Koningsdam was pure affordable luxury.

The ship featured an array of exquisite dining options; my personal favourite

worth every penny. One of the highlights for me was the hydrotherapy pool; you

can easily submerge in pure bliss for hours, prefect for a sea day! This was my

21st cruise and hand on heart it was the best ship I've been on, the food, service,

were superb. I have had such a great time and fell in love with the floating king,

and I am now planning on taking my entire family!