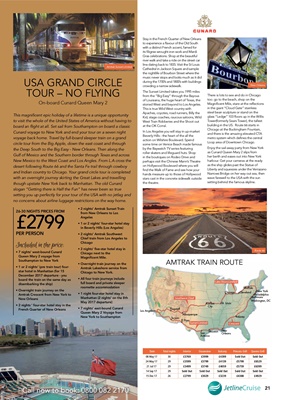 This magnificent epic holiday of a lifetime is a unique opportunity

board an flight at all. Set sail from Southampton on board a classic

voyage back home. Travel by full-board sleeper train on a grand

circle tour from the Big Apple, down the east coast and through

the Deep South to the Big Easy - New Orleans. Then along the

Gulf of Mexico and the Southern border through Texas and across

New Mexico to the West Coast and Los Angles. From L.A cross the

desert following Route 66 and the Santa Fe trail through cowboy

and Indian country to Chicago. Your grand circle tour is completed

with an overnight journey skirting the Great Lakes and travelling

though upstate New York back to Manhattan. The old Cunard

no concerns about airline luggage restrictions on the way home.

board the train on the same day as

• Overnight train journey on the

Amtrak Crescent from New York to

• 2 nights ' four-star hotel stay in the

Stay in the French Quarter of New Orleans

to experience a flavour of the Old South

with a distinct French accent, famed for

its filigree wrought-iron work and Mardi

Gras celebrations. Shop at the beautiful

river walk and take a ride on the street car

line dating back to 1835. Visit the St Louis

Cathedral in Jackson Square and sample

the nightlife of Bourbon Street where the

music never stops and looks much as it did

The Sunset Limited takes you 1995 miles

from the "Big Easy" through the Bayous

of Louisiana, the huge heart of Texas, the

storied West and beyond to Los Angeles.

This is true Wild West country with

West Train Robberies and the Shoot out

at the OK Corral.

In Los Angeles you will stay in up-market

Beverly Hills - the heart of the all the

some time on Venice Beach made famous

by the Baywatch TV series featuring

in the boutiques on Rodeo Drive and

on Hollywood Boulevard where you will

find the Walk of Fame and see how your

hands measure up to those of Hollywood

stars cast in the concrete sidewalk outside

There is lots to see and do in Chicago

too: go to the beach, shop on the

Magnificent Mile, stare at the reflections

in the giant "Cloud Gate" stainless

steel bean sculpture or stand on the

glass "Ledge" 103 floors up in the Willis

building in the US. Route 66 starts in

Chicago at the Buckingham Fountain,

and there is the amazing elevated CTA

metro system which defines the central

as Cunard Queen Mary 2 slips from

her berth and eases out into New York

harbour. Get your cameras at the ready

as the ship glides past the Statue of

Liberty and squeezes under the Verrazano

Narrows Bridge on her way out sea, then

wave farewell to the USA with the sun

setting behind the famous skyline.

from New Orleans to Los

Chief train from Los Angeles to

Chicago next to the

• Overnight train journey on the

• All four train journeys include

full board and private sleeper

Manhattan (2 nights' on the 8th