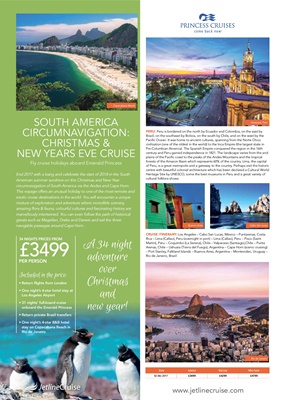 American summer sunshine on this Christmas and New Year

circumnavigation of South America via the Andes and Cape Horn.

exotic cruise destinations in the world. You will encounter a unique

mixture of exploration and adventure where incredible scenery,

marvellously intertwined. You can even follow the path of historical

greats such as Magellan, Drake and Darwin and sail the three

• One night's 4-star hotel stay at

onboard the Emerald Princess

stay on Copacabana Beach in

PERU: Peru is bordered on the north by Ecuador and Colombia, on the east by

Pacific Ocean. It was home to ancient cultures, spanning from the Norte Chico

Pre-Columbian America). The Spanish Empire conquered the region in the 16th

century and Peru gained independence in 1821. The landscape varies from the arid

forests of the Amazon Basin which represents 60% of the country. Lima, the capital

of Peru, is a great metropolis and a gateway to the country. Perhaps visit the historic

Heritage Site by UNESCO, some the best museums in Peru and a great variety of