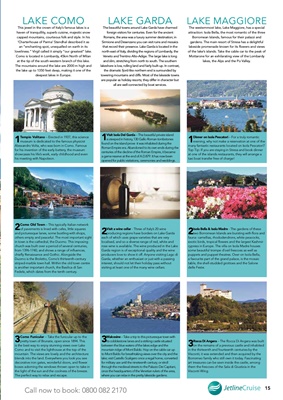 Tempio Volitano - Erected in 1927, this science

museum is dedicated to the famous physicist

Alessandro Volta, who was born in Como. Famous

for his invention of the early battery, the museum

showcases his life's work, early childhood and even

his meeting with Napoleon.

This jewel in the crown of Italy's famous lakes is a

capped mountains, courteous folk and style. In his

'Charterhouse of Parma' Stendhal described it as

an "enchanting spot, unequalled on earth in its

Como is located in Lombardy, 45km North of Milan

at the tip of the south-western branch of this lake.

The mountains around the lake are 2000 m high and

of pavements is lined with cafes, little squares

and picturesque lanes, some bustling with shops,

others empty and peaceful. The most important sight

in town is the cathedral, the Duomo. This imposing

church was built over a period of several centuries,

chiefly Renaissance and Gothic. Alongside the

Duomo is the Broletto, Como's thirteenth-century

is another important church, the Basilica di San

Fedele, which dates from the tenth century.

Como Funicular - Take the funicular up to the

pretty town of Brunate, open since 1894. This

is the best way to enjoy stunning views over Lake

Como and to visit the lighthouse at the top of the

mountain. The views are lovely and the architecture

blends into the land. Everywhere you look you see

boxes adorning the windows thrown open to take in

the light of the sun and the coolness of the breeze.

The perfect way to relax and escape.

is steeped in history, 130 Gallic-Roman tombstones

found on the island prove it was inhabited during the

Roman Empire era. Abandoned to its own ends during the

centuries of the decline of the Roman Empire, it became

The beautiful towns around Lake Garda have charmed

foreign visitors for centuries. Even for the ancient

Romans, the area was a luxury summer destination; in

Sirmione and Desenzano you can visit ruins and mosaics

that record their presence. Lake Garda is located in the

north-east of Italy, dividing the regions of Lombardy, the

Veneto and Trentino Alto-Adige. The large lake is long

and slim, stretching from north to south. The southern

lakeshore is low, rolling land and fairly built-up. In contrast,

the dramatic fjord-like northern end is surrounded by

towering mountains and cliffs. Most of the lakeside towns

are popular as holiday resorts; they differ in character but

all are well-connected by boat services.

each of which uses grape varieties that are very

localised, and so a diverse range of red, white and

rose wine is available. The wine produced in the Lake

Garda region is of exceptional quality and the wine

producers love to show it off. Anyone visiting Lago di

Garda, whether an enthusiast or just with a passing

interest, should not let their holiday pass without

visiting at least one of the many wine cellars.

Malcesine - Take a trip to this picturesque town with

its cobblestone lanes and a striking castle situated

between the blue waters of the lakes edge and the

mountain ridge of Mont Baldo. Hop on the cable car up

to Mont Baldo for breathtaking views over the city and the

for military use until the nineteenth century; or stroll

through the medieval streets to the Palazzo Dei Capitani,

once the headquarters of the Venetian rulers of the area,

where you can relax in the pretty lakeside gardens.

Dinner on Isola Pescatori - For a truly romantic

evening, why not make a reservation at one of the

Top Tip: If you are staying in Stresa and book dinner

at one of the islands restaurants, they will arrange a

The westernmost lake, Lake Maggiore, has a special

attraction: Isola Bella, the most romantic of the three

Borromean Islands, famous for their palazzi and

gardens. The main resort of Stresa has a delightful

lakeside promenade known for its flowers and views

of the lake's islands. Take the cable car to the peak of

Mottarone for an exhilarating view of the Lombardy

lakes, the Alps and the Po Valley.

Isola Bella & Isola Madre - The gardens of these

two Borromean Islands are bursting with flora and

cypress in Europe. The villa on Isola Madre houses

some beautiful trompe d'oeil frescoes as well as

puppets and puppet theatres. Over on Isola Bella,

a favourite part of the grand palace, is the mosaic

table, the shell-studded grottoes and the Salone

on the remains of a previous castle and inhabited

in the thirteenth and fourteenth centuries by the

Visconti; it was extended and then acquired by the

Borromeo family who still own it today. Fascinating

art treasures can be seen inside the castle, among

them the frescoes of the Sala di Giustizia in the