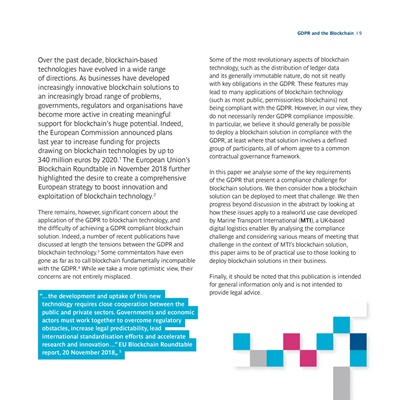 Over the past decade, blockchain-based

technologies have evolved in a wide range

of directions. As businesses have developed

an increasingly broad range of problems,

governments, regulators and organisations have

drawing on blockchain technologies by up to

highlighted the desire to create a comprehensive

European strategy to boost innovation and

There remains, however, significant concern about the

application of the GDPR to blockchain technology, and

the difficulty of achieving a GDPR compliant blockchain

solution. Indeed, a number of recent publications have

discussed at length the tensions between the GDPR and

blockchain technology.3 Some commentators have even

gone as far as to call blockchain fundamentally incompatible

with the GDPR.4 While we take a more optimistic view, their

concerns are not entirely misplaced.

"… the development and uptake of this new

technology requires close cooperation between the

actors must work together to overcome regulatory

Some of the most revolutionary aspects of blockchain

technology, such as the distribution of ledger data

and its generally immutable nature, do not sit neatly

with key obligations in the GDPR. These features may

lead to many applications of blockchain technology

(such as most public, permissionless blockchains) not

being compliant with the GDPR. However, in our view, they

In particular, we believe it should generally be possible

to deploy a blockchain solution in compliance with the

GDPR, at least where that solution involves a defined

group of participants, all of whom agree to a common

In this paper we analyse some of the key requirements

of the GDPR that present a compliance challenge for

blockchain solutions. We then consider how a blockchain

solution can be deployed to meet that challenge. We then

progress beyond discussion in the abstract by looking at

how these issues apply to a realworld use case developed

challenge and considering various means of meeting that

challenge in the context of MTI's blockchain solution,

deploy blockchain solutions in their business.

Finally, it should be noted that this publication is intended

for general information only and is not intended to

GDPR and the Blockchain I 9