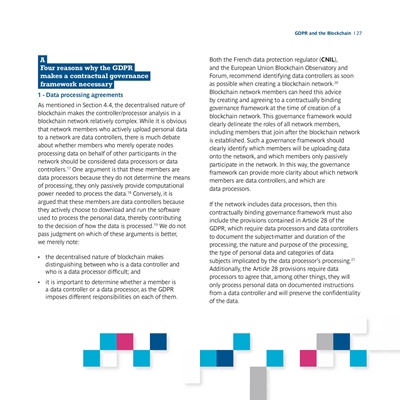 Four reasons why the GDPR

As mentioned in Section 4.4, the decentralised nature of

blockchain makes the controller/processor analysis in a

blockchain network relatively complex. While it is obvious

to a network are data controllers, there is much debate

about whether members who merely operate nodes

processing data on behalf of other participants in the

network should be considered data processors or data

controllers.17 One argument is that these members are

data processors because they do not determine the means

of processing, they only passively provide computational

power needed to process the data.18 Conversely, it is

argued that these members are data controllers because

they actively choose to download and run the software

to the decision of how the data is processed.19 We do not

pass judgment on which of these arguments is better,

• the decentralised nature of blockchain makes

distinguishing between who is a data controller and

who is a data processor difficult; and

• it is important to determine whether a member is

a data controller or a data processor, as the GDPR

imposes different responsibilities on each of them.

and the European Union Blockchain Observatory and

as possible when creating a blockchain network.20

by creating and agreeing to a contractually binding

governance framework at the time of creation of a

blockchain network. This governance framework would

clearly delineate the roles of all network members,

including members that join after the blockchain network

is established. Such a governance framework should

clearly identify which members will be uploading data

onto the network, and which members only passively

participate in the network. In this way, the governance

framework can provide more clarity about which network

members are data controllers, and which are

If the network includes data processors, then this

include the provisions contained in Article 28 of the

to document the subject-matter and duration of the

processing, the nature and purpose of the processing,

the type of personal data and categories of data

processors to agree that, among other things, they will

from a data controller and will preserve the confidentiality

GDPR and the Blockchain I 27