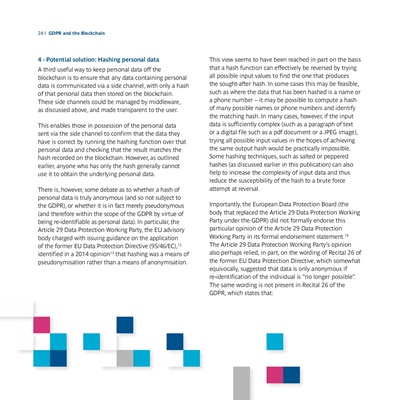 A third useful way to keep personal data off the

blockchain is to ensure that any data containing personal

data is communicated via a side channel, with only a hash

of that personal data then stored on the blockchain.

These side channels could be managed by middleware,

as discussed above, and made transparent to the user.

This enables those in possession of the personal data

sent via the side channel to confirm that the data they

have is correct by running the hashing function over that

personal data and checking that the result matches the

hash recorded on the blockchain. However, as outlined

earlier, anyone who has only the hash generally cannot

use it to obtain the underlying personal data.

There is, however, some debate as to whether a hash of

personal data is truly anonymous (and so not subject to

the GDPR), or whether it is in fact merely pseudonymous

(and therefore within the scope of the GDPR by virtue of

being re-identifiable as personal data). In particular, the

body charged with issuing guidance on the application

identified in a 2014 opinion13 that hashing was a means of

pseudonymisation rather than a means of anonymisation.

that a hash function can effectively be reversed by trying

all possible input values to find the one that produces

the sought-after hash. In some cases this may be feasible,

a phone number - it may be possible to compute a hash

of many possible names or phone numbers and identify

the matching hash. In many cases, however, if the input

data is sufficiently complex (such as a paragraph of text

or a digital file such as a pdf document or a JPEG image),

trying all possible input values in the hopes of achieving

the same output hash would be practically impossible.

Some hashing techniques, such as salted or peppered

hashes (as discussed earlier in this publication) can also

help to increase the complexity of input data and thus

reduce the susceptibility of the hash to a brute force

Importantly, the European Data Protection Board (the

Party under the GDPR) did not formally endorse this

also perhaps relied, in part, on the wording of Recital 26 of

equivocally, suggested that data is only anonymous if

re-identification of the individual is "no longer possible".

The same wording is not present in Recital 26 of the

GDPR, which states that:

24 I GDPR and the Blockchain