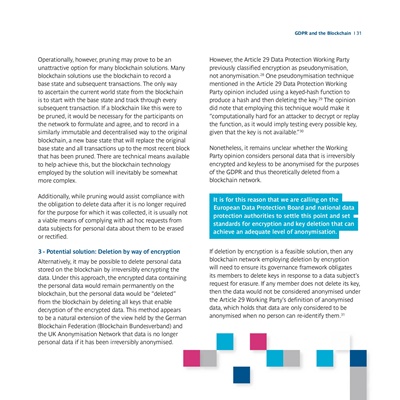 Operationally, however, pruning may prove to be an

unattractive option for many blockchain solutions. Many

blockchain solutions use the blockchain to record a

base state and subsequent transactions. The only way

to ascertain the current world state from the blockchain

is to start with the base state and track through every

subsequent transaction. If a blockchain like this were to

be pruned, it would be necessary for the participants on

the network to formulate and agree, and to record in a

similarly immutable and decentralised way to the original

blockchain, a new base state that will replace the original

base state and all transactions up to the most recent block

that has been pruned. There are technical means available

to help achieve this, but the blockchain technology

employed by the solution will inevitably be somewhat

Additionally, while pruning would assist compliance with

the obligation to delete data after it is no longer required

for the purpose for which it was collected, it is usually not

a viable means of complying with ad hoc requests from

data subjects for personal data about them to be erased

Alternatively, it may be possible to delete personal data

stored on the blockchain by irreversibly encrypting the

data. Under this approach, the encrypted data containing

the personal data would remain permanently on the

blockchain, but the personal data would be "deleted"

from the blockchain by deleting all keys that enable

decryption of the encrypted data. This method appears

the UK Anonymisation Network that data is no longer

personal data if it has been irreversibly anonymised.

not anonymisation.28 One pseudonymisation technique

produce a hash and then deleting the key.29 The opinion

did note that employing this technique would make it

"computationally hard for an attacker to decrypt or replay

the function, as it would imply testing every possible key,

given that the key is not available."30

Nonetheless, it remains unclear whether the Working

encrypted and keyless to be anonymised for the purposes

of the GDPR and thus theoretically deleted from a

It is for this reason that we are calling on the

protection authorities to settle this point and set

standards for encryption and key deletion that can

achieve an adequate level of anonymisation.

If deletion by encryption is a feasible solution, then any

will need to ensure its governance framework obligates

its members to delete keys in response to a data subject's

request for erasure. If any member does not delete its key,

then the data would not be considered anonymised under

data, which holds that data are only considered to be

anonymised when no person can re-identify them.31

GDPR and the Blockchain I 31