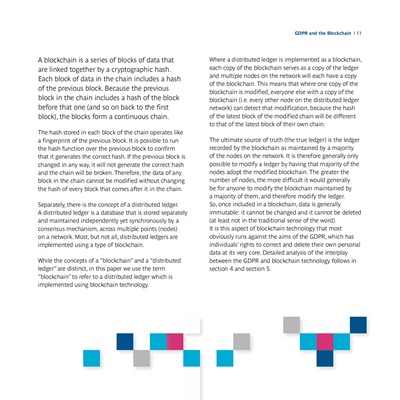 A blockchain is a series of blocks of data that

are linked together by a cryptographic hash.

Each block of data in the chain includes a hash

block in the chain includes a hash of the block

before that one (and so on back to the first

The hash stored in each block of the chain operates like

a fingerprint of the previous block. It is possible to run

the hash function over the previous block to confirm

that it generates the correct hash. If the previous block is

changed in any way, it will not generate the correct hash

and the chain will be broken. Therefore, the data of any

block in the chain cannot be modified without changing

the hash of every block that comes after it in the chain.

Separately, there is the concept of a distributed ledger.

A distributed ledger is a database that is stored separately

and maintained independently yet synchronously by a

on a network. Most, but not all, distributed ledgers are

implemented using a type of blockchain.

While the concepts of a "blockchain" and a "distributed

ledger" are distinct, in this paper we use the term

"blockchain" to refer to a distributed ledger which is

Where a distributed ledger is implemented as a blockchain,

and multiple nodes on the network will each have a copy

of the blockchain. This means that where one copy of the

blockchain is modified, everyone else with a copy of the

blockchain (i.e. every other node on the distributed ledger

network) can detect that modification, because the hash

of the latest block of the modified chain will be different

to that of the latest block of their own chain.

The ultimate source of truth (the true ledger) is the ledger

recorded by the blockchain as maintained by a majority

of the nodes on the network. It is therefore generally only

possible to modify a ledger by having that majority of the

nodes adopt the modified blockchain. The greater the

number of nodes, the more difficult it would generally

be for anyone to modify the blockchain maintained by

a majority of them, and therefore modify the ledger.

So, once included in a blockchain, data is generally

(at least not in the traditional sense of the word).

It is this aspect of blockchain technology that most

obviously runs against the aims of the GDPR, which has

individuals' rights to correct and delete their own personal

data at its very core. Detailed analysis of the interplay

between the GDPR and blockchain technology follows in

GDPR and the Blockchain I 11