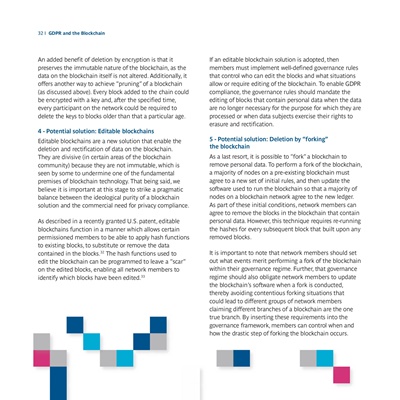 An added benefit of deletion by encryption is that it

preserves the immutable nature of the blockchain, as the

data on the blockchain itself is not altered. Additionally, it

offers another way to achieve "pruning" of a blockchain

(as discussed above). Every block added to the chain could

be encrypted with a key and, after the specified time,

every participant on the network could be required to

delete the keys to blocks older than that a particular age.

Editable blockchains are a new solution that enable the

deletion and rectification of data on the blockchain.

They are divisive (in certain areas of the blockchain

community) because they are not immutable, which is

seen by some to undermine one of the fundamental

premises of blockchain technology. That being said, we

believe it is important at this stage to strike a pragmatic

balance between the ideological purity of a blockchain

As described in a recently granted U.S. patent, editable

blockchains function in a manner which allows certain

permissioned members to be able to apply hash functions

to existing blocks, to substitute or remove the data

contained in the blocks.32 The hash functions used to

edit the blockchain can be programmed to leave a "scar"

on the edited blocks, enabling all network members to

identify which blocks have been edited.33

If an editable blockchain solution is adopted, then

that control who can edit the blocks and what situations

allow or require editing of the blockchain. To enable GDPR

compliance, the governance rules should mandate the

editing of blocks that contain personal data when the data

are no longer necessary for the purpose for which they are

processed or when data subjects exercise their rights to

As a last resort, it is possible to "fork" a blockchain to

remove personal data. To perform a fork of the blockchain,

a majority of nodes on a pre-existing blockchain must

agree to a new set of initial rules, and then update the

software used to run the blockchain so that a majority of

nodes on a blockchain network agree to the new ledger.

As part of these initial conditions, network members can

agree to remove the blocks in the blockchain that contain

the hashes for every subsequent block that built upon any

It is important to note that network members should set

out what events merit performing a fork of the blockchain

within their governance regime. Further, that governance

the blockchain's software when a fork is conducted,

could lead to different groups of network members

claiming different branches of a blockchain are the one

true branch. By inserting these requirements into the

governance framework, members can control when and

how the drastic step of forking the blockchain occurs.

32 I GDPR and the Blockchain