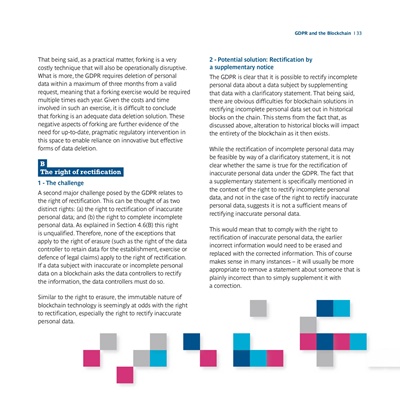 That being said, as a practical matter, forking is a very

costly technique that will also be operationally disruptive.

What is more, the GDPR requires deletion of personal

data within a maximum of three months from a valid

request, meaning that a forking exercise would be required

multiple times each year. Given the costs and time

involved in such an exercise, it is difficult to conclude

that forking is an adequate data deletion solution. These

negative aspects of forking are further evidence of the

this space to enable reliance on innovative but effective

The right of rectification

A second major challenge posed by the GDPR relates to

the right of rectification. This can be thought of as two

distinct rights: (a) the right to rectification of inaccurate

personal data; and (b) the right to complete incomplete

personal data. As explained in Section 4.6(B) this right

is unqualified. Therefore, none of the exceptions that

controller to retain data for the establishment, exercise or

defence of legal claims) apply to the right of rectification.

If a data subject with inaccurate or incomplete personal

data on a blockchain asks the data controllers to rectify

the information, the data controllers must do so.

Similar to the right to erasure, the immutable nature of

blockchain technology is seemingly at odds with the right

to rectification, especially the right to rectify inaccurate

The GDPR is clear that it is possible to rectify incomplete

personal data about a data subject by supplementing

that data with a clarificatory statement. That being said,

there are obvious difficulties for blockchain solutions in

blocks on the chain. This stems from the fact that, as

discussed above, alteration to historical blocks will impact

the entirety of the blockchain as it then exists.

While the rectification of incomplete personal data may

be feasible by way of a clarificatory statement, it is not

clear whether the same is true for the rectification of

inaccurate personal data under the GDPR. The fact that

a supplementary statement is specifically mentioned in

the context of the right to rectify incomplete personal

data, and not in the case of the right to rectify inaccurate

personal data, suggests it is not a sufficient means of

This would mean that to comply with the right to

incorrect information would need to be erased and

replaced with the corrected information. This of course

makes sense in many instances - it will usually be more

appropriate to remove a statement about someone that is

plainly incorrect than to simply supplement it with

GDPR and the Blockchain I 33