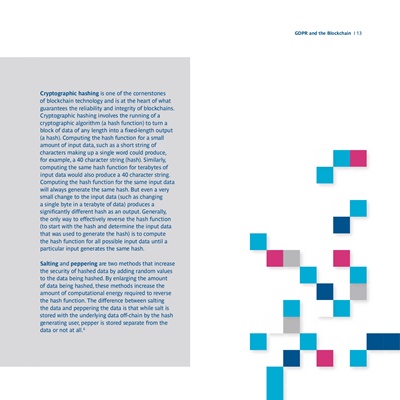 Cryptographic hashing is one of the cornerstones

of blockchain technology and is at the heart of what

guarantees the reliability and integrity of blockchains.

Cryptographic hashing involves the running of a

cryptographic algorithm (a hash function) to turn a

block of data of any length into a fixed-length output

(a hash). Computing the hash function for a small

amount of input data, such as a short string of

characters making up a single word could produce,

computing the same hash function for terabytes of

Computing the hash function for the same input data

will always generate the same hash. But even a very

small change to the input data (such as changing

a single byte in a terabyte of data) produces a

the only way to effectively reverse the hash function

(to start with the hash and determine the input data

that was used to generate the hash) is to compute

the hash function for all possible input data until a

Salting and peppering are two methods that increase

the security of hashed data by adding random values

to the data being hashed. By enlarging the amount

of data being hashed, these methods increase the

the hash function. The difference between salting

the data and peppering the data is that while salt is

stored with the underlying data off-chain by the hash

generating user, pepper is stored separate from the

data or not at all.6

GDPR and the Blockchain I 13