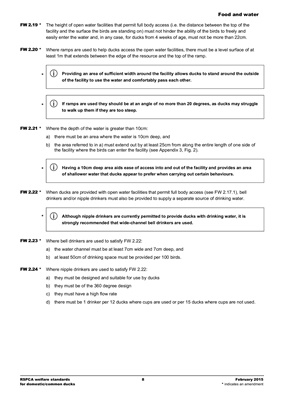 FW 2.19 * The height of open water facilities that permit full body access (i.e. the distance between the top of the

easily enter the water and, in any case, for ducks from 4 weeks of age, must not be more than 22cm.

FW 2.20 * Where ramps are used to help ducks access the open water facilities, there must be a level surface of at

least 1m that extends between the edge of the resource and the top of the ramp.

of the facility to use the water and comfortably pass each other.

If ramps are used they should be at an angle of no more than 20 degrees, as ducks may struggle

to walk up them if they are too steep.

a) there must be an area where the water is 10cm deep, and

of shallower water that ducks appear to prefer when carrying out certain behaviours.

drinkers and/or nipple drinkers must also be provided to supply a separate source of drinking water.

Although nipple drinkers are currently permitted to provide ducks with drinking water, it is

a) the water channel must be at least 7cm wide and 7cm deep, and

b) at least 50cm of drinking space must be provided per 100 birds.

a) they must be designed and suitable for use by ducks

b) they must be of the 360 degree design

c) they must have a high flow rate