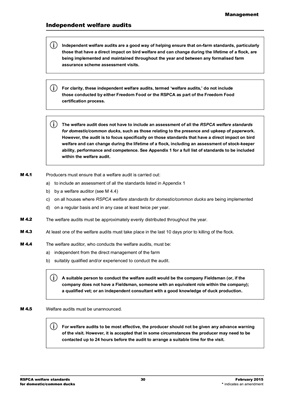 those that have a direct impact on bird welfare and can change during the lifetime of a flock, are

for domestic/common ducks, such as those relating to the presence and upkeep of paperwork.

However, the audit is to focus specifically on those standards that have a direct impact on bird

welfare and can change during the lifetime of a flock, including an assessment of stock-keeper

ability, performance and competence. See Appendix 1 for a full list of standards to be included

within the welfare audit.

M 4.1 Producers must ensure that a welfare audit is carried out:

d) on a regular basis and in any case at least twice per year.

M 4.2 The welfare audits must be approximately evenly distributed throughout the year.

M 4.3 At least one of the welfare audits must take place in the last 10 days prior to killing of the flock.

a) independent from the direct management of the farm

b) suitably qualified and/or experienced to conduct the audit.

A suitable person to conduct the welfare audit would be the company Fieldsman (or, if the

company does not have a Fieldsman, someone with an equivalent role within the company);

a qualified vet; or an independent consultant with a good knowledge of duck production.

M 4.5 Welfare audits must be unannounced.

For welfare audits to be most effective, the producer should not be given any advance warning

of the visit. However, it is accepted that in some circumstances the producer may need to be

contacted up to 24 hours before the audit to arrange a suitable time for the visit.