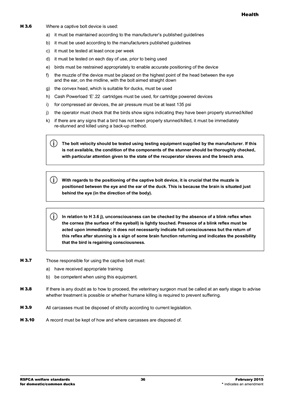 H 3.6 Where a captive bolt device is used:

a) it must be maintained according to the manufacturer's published guidelines

b) it must be used according to the manufacturers published guidelines

c) it must be tested at least once per week

d) it must be tested on each day of use, prior to being used

and the ear, on the midline, with the bolt aimed straight down

g) the convex head, which is suitable for ducks, must be used

i) for compressed air devices, the air pressure must be at least 135 psi

k) if there are any signs that a bird has not been properly stunned/killed, it must be immediately

The bolt velocity should be tested using testing equipment supplied by the manufacturer. If this

is not available, the condition of the components of the stunner should be thoroughly checked,

with particular attention given to the state of the recuperator sleeves and the breech area.

With regards to the positioning of the captive bolt device, it is crucial that the muzzle is

positioned between the eye and the ear of the duck. This is because the brain is situated just

behind the eye (in the direction of the body).

In relation to H 3.6 j), unconsciousness can be checked by the absence of a blink reflex when

the cornea (the surface of the eyeball) is lightly touched. Presence of a blink reflex must be

acted upon immediately: it does not necessarily indicate full consciousness but the return of

that the bird is regaining consciousness.

H 3.7 Those responsible for using the captive bolt must:

a) have received appropriate training

b) be competent when using this equipment.

H 3.8 If there is any doubt as to how to proceed, the veterinary surgeon must be called at an early stage to advise

whether treatment is possible or whether humane killing is required to prevent suffering.

H 3.9 All carcasses must be disposed of strictly according to current legislation.

H 3.10 A record must be kept of how and where carcasses are disposed of.