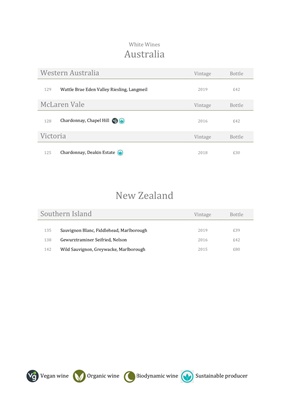 Argentina has the greatest concentration of high altitude vineyards in the world,

too big and alcoholic.

Chile is in the enviable position of having an ideal climate for growing grapes, in fact

flourish in these conditions and very few diseases give any real problem. Also since

advantage of some of the most modern and well equipped wineries in the world, plus

As a largest wine producer outside Europe, but also one of the most enthusiastic

consumers of wine, the United States exports are skewed towards basic bulk brands,

so easily created in to the hot central vineyard. California makes world class

Chardonnay; the wines are rich, complex and oaky.

At 360 years, old this year, South Africa's wine history is longer than most new world

countries, but it joined the modern era only recently, when sanctions were lifted

post-apartheid and it emerged blinking onto the world stage. South Africa, after Loire,

is one of the strongest countries for Chenin, which ripens to reveal luscious orchard