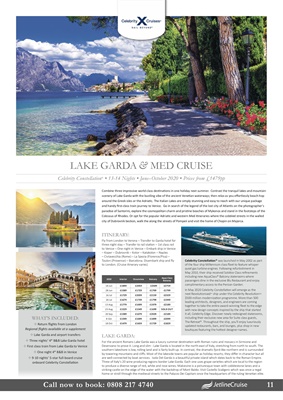 scenery of Lake Garda with the bustling vibe of the ancient Venetian waterways; then relax as you effortlessly beach hop

around the Greek isles or the Adriatic. The Italian Lakes are simply stunning and easy to reach with our unique package

and handy first-class train journey to Venice. Go in search of the legend of the lost city of Atlantis on the photographer's

paradise of Santorini, explore the cosmopolitan charm and pristine beaches of Mykonos and stand in the footsteps of the

Colossus of Rhodes. Or opt for the popular Adriatic and western Med itineraries where the cobbled streets in the walled

city of Dubrovnik beckon, walk the along the streets of Pompeii and visit the home of Chopin on Majorca.

Fly from London to Verona - Transfer to Garda hotel for

to Venice - One night in Venice - Embark ship in Venice

Desenzano to prove it. Long and slim - Lake Garda is located in the north-east of Italy, stretching from north to south. The

southern lakeshore is low, rolling land and is fairly built-up. In contrast, the dramatic fjord-like northern end is surrounded

by towering mountains and cliffs. Most of the lakeside towns are popular as holiday resorts; they differ in character but all

are well-connected by boat services. Isola Del Garda is a beautiful private island which dates back to the Roman Empire.

Three of Italy's 20 wine producing regions border Lake Garda. Each one uses grape varieties which are local to the region

to produce a diverse range of red, white and rose wines. Malcesine is a picturesque town with cobblestone lanes and a

striking castle on the edge of the water with the backdrop of Mont Baldo. Visit Castello Scaligero which was once a regal

home or stroll through the medieval streets to the Palazzo Dei Capitani once the headquarters of the ruling Venetian elite.

Celebrity Constellation® was launched in May 2002 as part

of the four ship Millennium class fleet to feature whisper

including new AquaClass® Balcony staterooms where

passengers dine in the exclusive Blu Restaurant and enjoy

In May 2020 Celebrity Constellation will emerge as the

together to take the entire award-winning fleet to the edge

with new design concepts inspired by the ship that started

including their exclusive new area for Suite class guests,

The Retreat®. Throughout the ship, you'll enjoy luxuriously

updated restaurants, bars, and lounges, plus shop in new