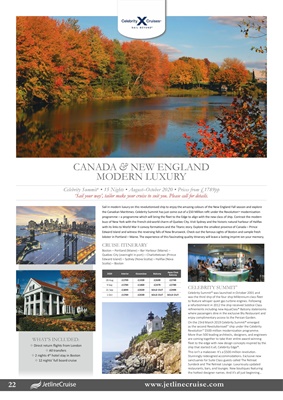 the Canadian Maritimes. Celebrity Summit has just come out of a $50 Million refit under the RevolutionSM modernisation

programme - a programme which will bring the fleet to the Edge to align with the new class of ship. Contrast the modern

buzz of New York with the French old-world charm of Quebec City. Visit Sydney and the historic natural harbour of Halifax

with its links to World War II convoy formations and the Titanic story. Explore the smallest province of Canada - Prince

Edward Island and witness the reversing falls of New Brunswick. Check out the famous sights of Boston and sample fresh

lobster in Portland - Maine. The experience of this fascinating quality itinerary will leave a lasting imprint ion your memory.

'Sail your way', tailor make your cruise to suit you. Please call for details.

Celebrity Summit® was launched in October 2001 and

was the third ship of the four ship Millennium class fleet

a refurbishment in 2012 the ship received Solstice Class

where passengers dine in the exclusive Blu Restaurant and

as the second Revolutionised

ship under the Celebrity

are coming together to take their entire award-winning

fleet to the edge with new design concepts inspired by the

ship that started it all, Celebrity Edge®.

This isn't a makeover. It's a $500-million revolution.

the hottest designer names. And it's all just beginning…