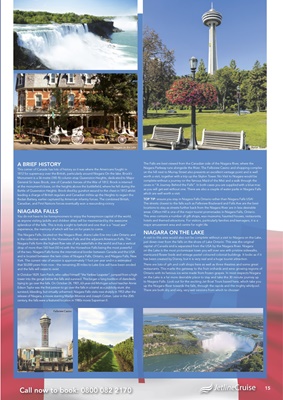 1812 for supremacy over the British, particularly around Niagara On the lake. Brock's

Monument is a 56 metre (185 ft) column atop Queenston Heights, dedicated to Major

General Sir Isaac Brock, one of Canada's heroes of the War of 1812. Brock is interred

at the monument's base, on the heights above the battlefield, where he fell during the

Battle of Queenston Heights. Brock died by gunshot wound to the chest in 1812 whilst

You do not have to be honeymooners to enjoy the honeymoon capital of the world,

splendour of the falls. This is truly a sight to behold and one that is a "must see"

experience, the memory of which will live on for years to come.

The Niagara Falls, located on the Niagara River, drains Lake Erie into Lake Ontario and

is the collective name for the Horseshoe Falls and the adjacent American Falls. The

of the two. Niagara Falls forms the international border between Canada and the USA

York. The current rate of erosion is approximately 1 foot per year and it is estimated

that 50,000 years from now - the remaining 20 miles to Lake Erie will have been eroded

and the falls will cease to exist.

In October 1829, Sam Patch, who called himself "the Yankee Leapster", jumped from a high

tower into the gorge below the falls and survived. This began a long tradition of daredevils

trying to go over the falls. On October 24, 1901, 63-year-old Michigan school teacher Annie

Edson Taylor was the first person to go over the falls in a barrel as a publicity stunt: she

survived, bleeding, but virtually unharmed. Niagara Falls visits rose sharply in 1953 after the

release of Niagara, a movie starring Marilyn Monroe and Joseph Cotten. Later in the 20th

century, the falls were a featured location in 1980s movie Superman II.

The Falls are best viewed from the Canadian side of the Niagara River, where the

Niagara Parkway runs alongside the River. The Fallsview Casino and shopping complex

worth a visit, together with a trip up the Skylon Tower. No Visit to Niagara would be

caves in "A Journey Behind the Falls". In both cases you are supplied with a blue mac

as you will get wet without one. There are also a couple of water parks in Niagara Falls

which are well worth a visit.

areas. Clifton Hill is one of the major tourist promenades in Niagara Falls, Ontario.

hotels and themed attractions. For visitors, particularly families and teenagers, it is a

NIAGARA ON THE LAKE

A visit to this area would also not be complete without a visit to Niagara on the Lake,

just down river from the falls on the shore of Lake Ontario. This was the original

capital of Canada and is separated from the USA by the Niagara River. Niagara

on the Lake is the most picturesque town you will ever see with pristine sidewalks,

manicured flower beds and vintage pastel coloured colonial buildings. It looks as if it

has been created by Disney, but it is very real and a huge tourist attraction.

restaurants. This marks the gateway to the fruit orchards and wine growing regions of

Ontario with its famous ice wine made from frozen grapes. In most respects Niagara

to Niagara Falls. Look out for the exciting Jet Boat Tours based here, which take you

up the Niagara River towards the falls, through the rapids and the mighty whirlpool.

There are both dry and very, very wet versions from which to choose!

Niagara on the Lake Skylon Tower