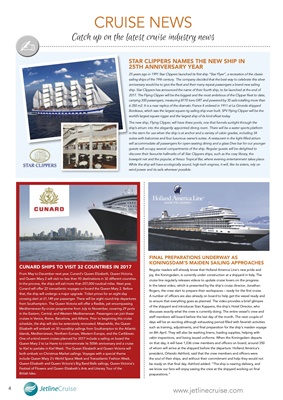 Catch up on the latest cruise industry news

25 years ago in 1991 Star Clippers launched its first ship "Star Flyer", a recreation of the classic

sailing ships of the 19th century. The company decided that the best way to celebrate this silver

ship. Star Clippers has announced the name of their fourth ship, to be launched at the end of

2017. The Flying Clipper will be the biggest and the most ambitious of the Clipper fleet to date,

Bordeaux, which was the largest square rig sailing ship ever built. SPV Flying Clipper will be the

world's largest square rigger and the largest ship of its kind afloat today.

The new ship, Flying Clipper, will have three pools, one that funnels sunlight through the

ship's atrium into the elegantly appointed dining room. There will be a water sports platform

in the stern for use when the ship is at anchor and a variety of cabin grades, including 34

suites with balconies and four luxurious owner's suites. A restaurant in the light-filled atrium

guests will occupy several compartments of the ship. Regular guests will be delighted to

discover their favourite hallmarks of all Star Clippers ships, such as the cosy library, the

While the ship will have ecologically sound, high-tech engines, it will, like its sisters, rely on

wind power and its sails wherever possible.

From May to December next year, Cunard's Queen Elizabeth, Queen Victoria,

and Queen Mary 2 will visit no less than 93 destinations in 32 different countries.

In the process, the ships will sail more than 207,000 nautical miles. Next year,

Cunard will offer 22 transatlantic voyages on board the Queen Mary 2. Before

that, the ship will undergo a major upgrade. Ticket prices for an eight-day

crossing start at £1,149 per passenger. There will be eight round-trip departures

from Southampton. The Queen Victoria will offer a flexible, yet encompassing

in the Eastern, Central, and Western Mediterranean. Passengers can join these

cruises in Venice, Rome, Barcelona, and Athens. Prior to beginning this cruise

schedule, the ship will also be extensively renovated. Meanwhile, the Queen

to Kiel to partake in Kiel Week. The Queen Elizabeth and Queen Victoria will

both embark on Christmas Market sailings. Voyages with a special theme

joy, the Koningsdam, is currently under construction at a shipyard in Italy. The

In the latest video, which is presented by the ship's cruise director, Jonathan

Rogers, the crew start to prepare their workspaces - ready for the first cruise.

to ensure that everything goes as planned. The video provides a brief glimpse

of the shipyard and introduces Stan Kuppens, the ship's Hotel Director, who

discusses exactly what the crew is currently doing. The entire vessel's crew and

staff members will board before the last day of the month. The next couple of

such as training, adjustments, and final preparation for the ship's maiden voyage

on 8th April. They will also be washing linens, loading supplies, helping with

cabin inspections, and being issued uniforms. When the Koningsdam departs

of whom will arrive at the shipyard before the departure. Holland America's

president, Orlando Ashford, said that the crew members and officers were

the soul of their ships, and without their commitment and help they would not

be ready on that final day. Ashford added: "The ship is nearing delivery, and