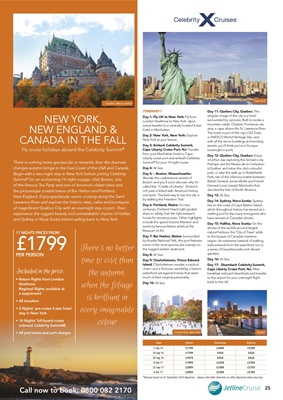 CANADA IN THE FALL

There is nothing more spectacular or romantic than the dramatic

changes autumn brings to the East Coast of the USA and Canada.

the picturesque coastal towns of Bar Harbor and Portland,

Lawrence River and explore the historic sites, cafes and boutiques

of magnificent Quebec City with an overnight stay in port. Then

experience the rugged beauty and unmistakable charms of Halifax

and Sydney in Nova Scotia before sailing back to New York.

London Heathrow to New York. Upon

New York at your leisure.

from your Manhattan hotel to Cape

Summit® for your 14 night cruise.

Wander the cobblestone streets of

Boston and you'll soon discover why it's

called the "Cradle of Liberty". Boston's

rich past is linked with America's history

and spirit. The best way to see the city is

by walking the Freedom Trail.

ships to safety. Visit the light-keeper's

house for amazing views. Other highlights

include the grand Victoria Mansion and

works by famous Maine artists at the

some of the most spectacular scenery on

charm and a Victorian sensibility, a historic

waterfront set against homes that retain

much of their original personality.

singular image of the city is a hotel

surrounded by cannons. Built to evoke a

atop a cape above the St. Lawrence River.

The hotel is part of the city's Old Town,

a UNESCO World Heritage Site, and

with all the stone buildings and winding

past, or take the walk up to Battlefields

Park, site of the infamous battle between

decided the fate of North America.

lies on the coast of Cape Breton Island,

which throughout history has served as a

melting pot for the many immigrants who

have arrived on Canadian shores.

shores of the world's second-largest

to the beauty of Canada's maritime

region. An extensive network of walking

trails extends from the waterfront out to

a series of beautiful parks and vibrant

breakfast onboard disembark and transfer

to the airport for your overnight flight

• All port taxes and port charges

time to visit than

*Itinerary based on 02 September 2016 departure - please note other itineraries on other departure dates may vary.