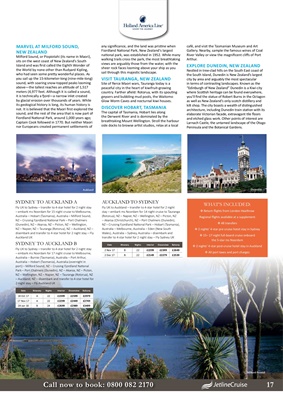 SYDNEY TO AUCKLAND A

SYDNEY TO AUCKLAND B

- Auckland, NZ - disembark and transfer to 4-star hotel for

Milford Sound, or Piopiotahi (its name in Maori),

sits on the west coast of New Zealand's South

Island and was first called the Eighth Wonder of

the World by none other than Rudyard Kipling,

who had seen some pretty wonderful places. As

you sail up the 15-kilometer-long (nine-mile-long)

above-the tallest reaches an altitude of 1,517

it is technically a fjord-a narrow inlet created

by glacial erosion over thousands of years. While

its geological history is long, its human history is

not. It is believed that the Maori first explored the

sound, and the rest of the area that is now part of

Fiordland National Park, around 1,000 years ago;

Captain Cook followed in 1770. But neither Maori

nor Europeans created permanent settlements of

any significance, and the land was pristine when

national park, was established in 1952. While many

walking trails cross the park, the most breathtaking

views are arguably those from the water, with the

sheer rock faces looming above your ship as you

sail through this majestic landscape.

Site of fierce Maori wars, Tauranga today is a

peaceful city in the heart of kiwifruit-growing

The capital of Tasmania, Hobart lies along

the Derwent River and is dominated by the

side docks to browse artist studios, relax at a local

café, and visit the Tasmanian Museum and Art

Gallery. Nearby, sample the famous wines of Coal

River Valley or view the magnificent cliffs of Port

Nestled in tree-clad hills on the South East coast of

city by area and arguably the most spectacular

"Edinburgh of New Zealand" Dunedin is a Kiwi city

where Scottish heritage can be found everywhere,

you'll find the statue of Robert Burns in the Octagon

as well as New Zealand's only scotch distillery and

kilt shop. The city boasts a wealth of distinguished

architecture, including Dunedin train station with its

and etched glass work. Other points of interest are

Larnach Castle, the untamed landscape of the Otago

Peninsula and the Botanical Gardens.