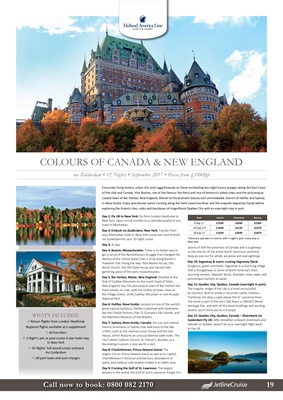 *Itinerary operates in reverse with 1 night's post cruise stay in

of the USA and Canada. Visit Boston, site of the famous Tea Party and one of America's oldest cities and the picturesque

coastal town of Bar Harbor, New England. Marvel at the dramatic beauty and unmistakable charms of Halifax and Sydney

in Nova Scotia. Enjoy spectacular scenic cruising along the Saint Lawrence River and the majestic Saguenay Fjords before

exploring the historic sites, cafes and boutiques of magnificent Quebec City with an overnight stay in port.

New York. Upon arrival transfer to a centrally located 4-star

your Manhattan hotel to New York cruise port and embark

ms Zuiderdam for your 10 night cruise.

Day 4: Boston, Massachusetts: There is no better way to

get a sense of the Revolutionary struggle that changed the

destiny of the United States than a stroll along Boston's

gathering place of the early revolutionaries.

foot of Cadillac Mountain on the south Coast of Main,

fresh lobster, or crab, walk the streets of town, relax on

Day 6: Halifax, Nova Scotia: Located on one of the world's

like the Citadel fortress, Pier 21 (Canada's Ellis Island), and

the Maritime Museum of the Atlantic.

historic landmarks in Sydney that date back to the late

1700's, such as the colonial Cossit House and the Jost

House, which features an unusual beehive bake-oven. The

fascinating museum is also worth a visit.

largest city on Prince Edward Island as well as its capital,

parks, and harbour side location makes it an idyllic stop.

Day 9: Cruising the Gulf of St. Lawrence: The largest

estuary in the world, the Gulf of Saint Lawrence fringes the

shores of half the provinces of Canada and is a gateway

to the interior of the entire North American continent.

Keep an eye out for whale, porpoise and seal sightings.

Gorgeous, green and Gallic, Saguenay is a charming village

that is the gateway to some of North America's most

The singular image of the city is a hotel surrounded

by cannons. Built to evoke a mountain castle, Chateau

Frontenac sits atop a cape above the St. Lawrence River.

The hotel is part of the city's Old Town, a UNESCO World

Heritage Site, and with all the stone buildings and winding

Zuiderdam Fly UK: After breakfast onboard disembark and

transfer to Quebec airport for your overnight flight back