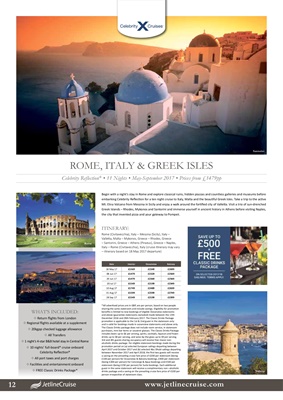 centrally located Memphis Downtown Hotel to make use of

Graceland, the home of Elvis Presley and see where the

King of Rock 'n' Roll lived. You will also be able to see where

the biggest names in Rock 'n' Soul got their careers started,

at the famous Sun Studio. Visit the inspiring museums

of America Soul Music at the Stax Museum of American

to the following: Graceland the home of Elvis Presley, The

Board the City of New Orleans before breakfast for a

daytime service to New Orleans. Stay for two nights in a

hotel within walking distance of the French Quarter and

Bourbon Street where the music never stops and period

buildings crowd a narrow sidewalk. Choose from one of

the following Caribbean cruises on board Carnival Dream

before flying home overnight to Heathrow:

of Mexico. Hotel stays in Chicago, Memphis & New Orleans are linked by a two part journey on the City Of New Orleans

Amtrak rail service through the American Mid-West heartland. This 926 mile adventure takes you through some of the

country's most varied and historic scenery; from the farmlands of Illinois, the forests of Tennessee, the mighty Mississippi

and the bayous of Louisiana. Visit the birth place of Blues, Jazz & Soul Music producing some of the biggest names in Music

sizzling sunshine on the beach, lazy afternoon naps and romantic midnight walks under a Caribbean canopy of stars.

Stay in the French Quarter of New Orleans to experience a

flavour of the Old South with a distinct French accent, famed

for its filigree wrought-iron work and Mardi Gras celebrations.

line dating back to 1835. Visit the St Louis Cathedral in Jackson

Square and sample the nightlife of Bourbon Street where the

and 1800's with buildings crowding a narrow sidewalk.

The Sunset Limited takes you 1995 miles from the "Big Easy"

through the Bayous of Louisiana, the huge heart of Texas, the

storied West and beyond to Los Angeles. This is true Wild West

Shoot out at the OK Corral.

of the all the action on Wilshire Boulevard. Spend some time on

Venice Beach made famous by the Baywatch TV series featuring

roller skaters and lifeguard huts. Shop in the boutiques on

Rodeo Drive and perhaps visit the Chinese Mann's Theatre on

Hollywood Boulevard where you will find the Walk of Fame and

see how your hands measure up to those of Hollywood stars

cast in the concrete sidewalk outside the theatre.

There is lots to see and do in Chicago too: go to the beach,

shop on the Magnificent Mile, stare at the reflections in the

the glass "Ledge" 103 floors up in the Willis Tower(formerly

Sears Tower), the tallest building in the US. Route 66 starts in

Chicago at the Buckingham Fountain, and there is the amazing

2 slips from her berth and eases out into New York Harbour. Get

Liberty and squeezes under the Verrazano Narrows Bridge on

her way out sea, then wave farewell to the USA with the sun

setting behind the famous skyline.

voyage from Southampton to New York

departure - you board the train on the same

day as disembarking the ship)

✥ All four train journeys include full board and

Voyage from New York to Southampton

board an flight at all. Set sail from Southampton on board a classic Cunard voyage to New York and end your tour on a

seven night voyage back home. Travel by full-board sleeper train on a grand circle journey from the Big Apple, down the

east coast and through the Deep South to the Big Easy - New Orleans. Then along the Gulf of Mexico and the Southern

border through Texas and across New Mexico to the West Coast and Beverly Hills in Los Angeles. From L.A cross the

desert following Route 66 and the Santa Fe Trail through cowboy and Indian country to Chicago. Your grand circle

Manhattan. The old Cunard slogan "Getting there is Half the Fun" has never been so true setting you up perfectly for

your tour of the USA with no jetlag and concerns about luggage restrictions on the way home.